BLURB:  MAKE LOVE NOT WAR
Make love, not war was the catch cry of the 1960’s. Against a background of anti-war demonstrations, hippies and free love, Caroline’s life is in turmoil. Her soldier brother is on his way to the jungles of . She discovers she is pregnant with her wealthy boss’ baby, and her draft dodger friend is on the run and needs her help. 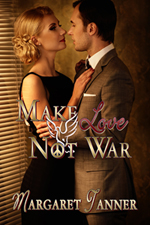 At the risk of revealing my age, I have to say the 1960’s was my time. Mini skirts, stilettos (I’ve bunions to prove it), beehive hair dos, I couldn’t quite manage that, although I did tease the life out of my hair and regularly put in coloured rinses, French Plum or Rich Burgundy, were the colours I favoured. I can remember when the Beatles made their first visit out to . A couple of girls I worked with were lucky enough to get tickets to their concerts, (we hated them, of course), they came to work the next days minus their voices, and stayed that way for about a week, because they had screamed so much.
We used manual typewriters in those days. One original and four copies of everything we typed. I don’t know how many blouses I ruined because I got ink on the sleeves from changing the typewriter ribbon or the black stuff off the carbon paper.
During this time the Vietnam War loomed in the background. The Australian government introduced conscription. It was in the form of a ballot, or the death lottery as many called it. All twenty year old males had to register, their birth dates were put into a barrel and a certain number were drawn out, and those young men had to report to the army and subsequently many of them were sent to . This of course caused severe bitterness and division in the community, and even though the government denied it, was subject to abuse and unfairness. Rich men kept their sons at university so they didn’t have to go.  Conscientious objectors were thrown into prison. Only sons were called up, yet families with two or three eligible males didn’t have any of their boys called up.
I only had one brother, and I can clearly remember my father (a World War 2 veteran) vowing, that if his son got called up, he would protest on the steps of the parliament with a placard on his back.
There were protests marches, anti-war demonstrations, and things often turned violent. Not that I went to any of the protest marches, but a cousin of mine did and got trampled by a police horse. A very turbulent time in our history and I was right in the middle of it.
http://www.amazon.com/Make-Love-Not-War-ebook/dp/B0094WQOPU/ref=sr_1_12?s=digital-text&ie=UTF8&qid=1346642917&sr=1-12&keywords=margaret+tanner
Posted by Margaret Tanner at September 07, 2012