Housekeeping and tidying up. Not my favourite topic or occupation, unless we are taking about tidying up my garden. In particular my rose garden, which I tend with loving care, because roses truly deserve special treatment. No chore to tidy up here. I banish any weed the moment it rears its ugly head near my “lovelies.”


Roses are my favourite flower. My husband thinks I am obsessed with them.  I always wear rose perfume, Bush Rose, Musk Rose. The Yardley (English company) Rose has a lovely perfume, as sweet and fragrant as its namesake. How many wonderful people have you met who are called Rose, Rosy, Rosemarie, Rosemary?


I have to confess that my garden is full of roses. Hubby hates them with a passion because he thinks they deliberately jump out and stick their prickles into him.


I love the old fashioned roses the best. They may not be quite as colourful as the modern day varieties, but they always have a gorgeous perfume.  Just Joey, a beautiful large bloomed orange rose with a delightful perfume is one of my favourites.  Another favourite is a blood red rose named , the perfume is as heady as wine. My garden has recently acquired a rose called. The Chocolate Rose. I have to say that although the bloom is pretty, it isn’t stunning, but it certainly has a chocolate perfume, and you can take that observation from a chocoholic. If there is one thing I know, it is the smell of chocolate.


It amazes me how often I seem to give the characters in my novels a floral name. It must have been an instinctive thing because I don’t recall actively trying to do this.


A few examples. In Haunted Hearts, the heroine’s daughter is called Rosie. In A Mortal Sin, the heroine is named Daphne. Iris is the wicked mother-in-law in Make Love Not War


I have also written a short story with the title Call Of The Apple Blossom.  Can you see a pattern here?

There is rarely a novel of mine that doesn't have at least one rose garden scene.

So, there you have it. I wonder if there is such a thing as a roseaholic?

Falsely Accused has recently been released  by BWL and is available on Amazon.
On board the convict ship taking them to the penal colony of , Maryanne Watson and Jake Smith meet and fall in love, but Jake hides a terrible secret that will take him to the gallows if it ever comes out.
On arrival in the lovers are separated. Maryanne is sent to work for the lecherous Captain Fitzhugh. After he attacks her she flees into the wilderness and eventually meets up with Jake who has escaped from a chain gang.  They set up home in a hidden valley and Maryanne falls pregnant.  Will Jake come out of hiding to protect his fledgling family? And how can love triumph over such crushing odds? 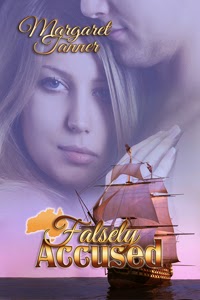