The day an elephant kissed me... by Sheila Claydon

I'm still talking about the things that happen on a journey that are often so much more interesting than the journey itself and today I'm remembering what happened to me in Thailand.
If you think of Bangkok you might conjure up images of elaborate and beautiful temples, huge statues of Buddha covered in gold leaf, shaven headed monks in saffron robes, and the picturesque floating markets where women sell tropical fruit and vegetables, fresh, ready-to-drink coconut juice and even local food cooked from the floating kitchens on their boats. All these things would be true, of course, as would images of flower bedecked hindu shrines and the ubiquitous 3-wheeled tuk tuks that are used all the time by locals while the less adventurous stick to a conventional taxi. There is the exciting and colourful nightlife too. Full of beautiful girls, and of the even more beautiful katoeys who are so feminine that it's almost impossible to believe they're not female, and who work for airlines, at cosmetic counters in upmarket shopping malls or star in cabaret shows. Some are even television celebrities.
There are the markets too. Vast affairs. In Bangkok the largest is the 35-acre Chatuchak market which has more than 8,000 market stalls with just about everything possible on sale, from underwear to live animals, or, if you're feeling tired, you can have a restful foot massage instead. Then, of course, there is the food. Thai food is wonderful. It has so many flavours, one for every palate, and the best food is very often found in shopping malls and on the street. Thai people love to cook and they love to eat and I once had a wonderful meal sitting at a dilapidated table outside a cafe only a few feet from the road. Frequented mainly by locals, every dish was such an assault on the taste buds that I didn't care at all about the traffic zooming by.
This post is not about all that, however. I'm not going to go into detail about any of the above. Instead I'm going to show you what was truly magical about my visit.
Overwhelmed by the noise of bustling Bangkok we decided to spend a few days at Hua Hin. Once a tranquil fishing village it became a Royal resort when King Ram VII discovered it in the 1920s, and even though it is now a popular holiday centre it still retains some of its original quaintness and peace. In addition, its beaches are spectacular, with clear blue seas, palm trees and all the other things that make for a cinematic setting. So was the highlight of my trip a few days in the tropical sunshine topping up my tan, or was it just resting under an umbrella while I sipped a beachside cocktail? No, those things didn't happen. Instead I went swimming with a baby elephant.
It wasn't planned, it wasn't touristy, I was just there when the mahout brought the baby onto the beach for his first glimpse of the sea. Although my elephant is probably full size by now, his behaviour was exactly the same as the one I've posted here. He was nervous at first, then excited and finally, totally elated as he rushed in and out of the waves and let them roll him over. And while he did all this I swam with him and played with him, and then, when he was finally too tired to do anything else but totter back up the beach, I was allowed to share his bananas. I had one to his dozen or so, and feeding them to him was wonderful. He took them so delicately and gratefully, and at the end, just before his mahout led him away, he kissed me. Well that's what it felt like anyway when he gently touched my cheek with the end of his trunk.
I know it is possible to have elephant 'experiences' in elephant sanctuaries and I'm sure those experiences are enjoyable but the magic of my encounter was that it was entirely spontaneous and natural. My baby elephant wasn't trained or domesticated, he was just full of the energy and joy de vivre of the very young. How lucky I was to be on that beach that day. I will never forget it. 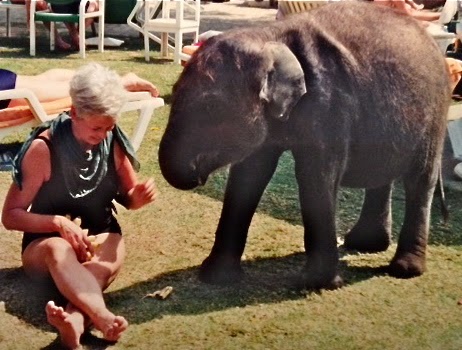