The Mystery Lady by Diane Bator 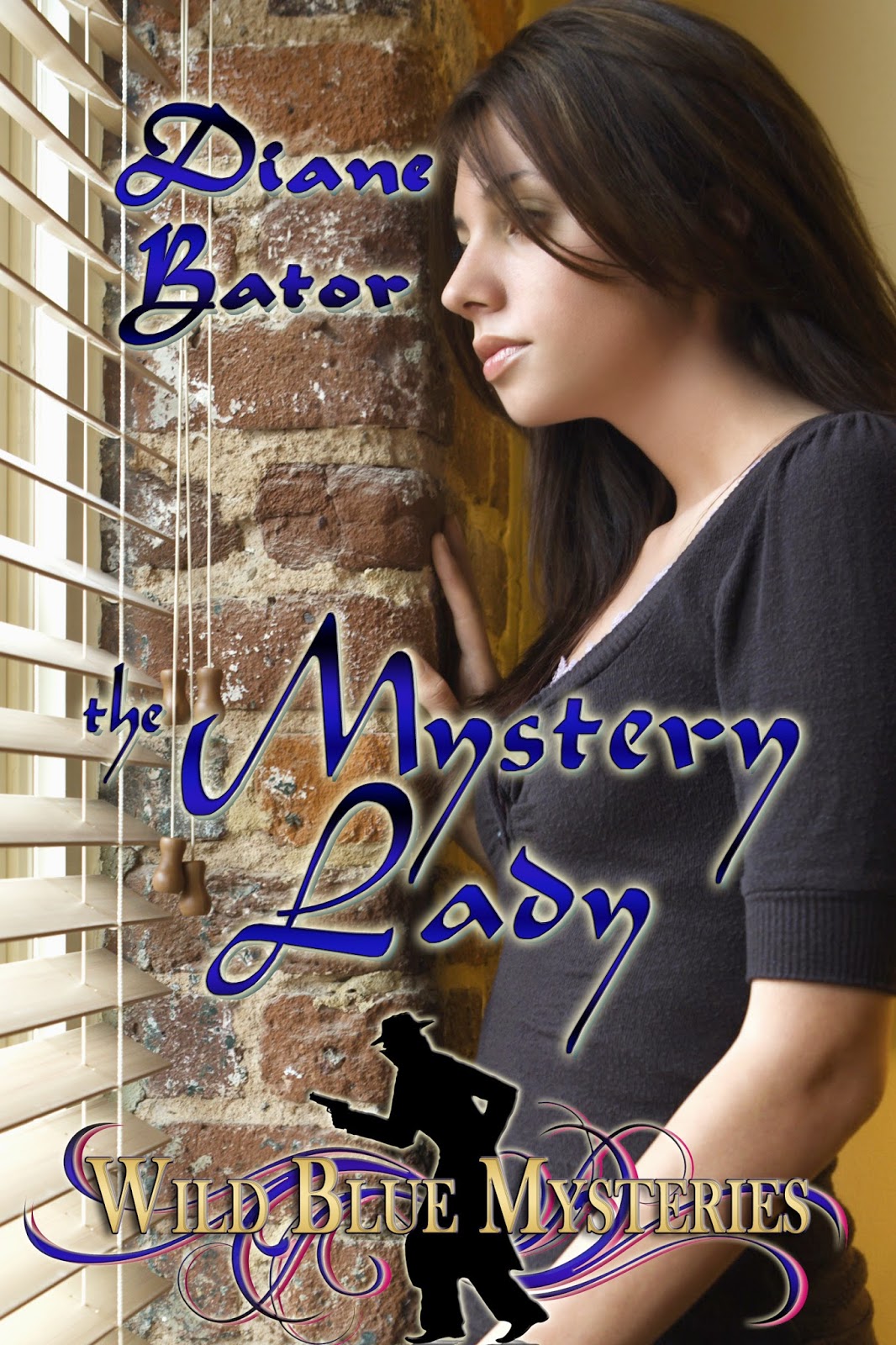 The Mystery Lady is the second book in my Wild Blue Mysteries series with Books We Love. Oddly enough, Lucy Stephen was created while looking out my bedroom window and watching vehicles drive by. While I'm lucky enough to not have had a stalker, it did create that aura of "what if" that always plagues a writer. So Lucy became a mystery writer who was dragged into solving a murder.

Lucy's stalker, aka Danny Walker from The Bookstore Lady, becomes a victim of being hired by the wrong person at the wrong time. Unable to prove Lucy's guilt, he sets out to save the lives of Lucy and her children.

Lucy Stephen twisted her wedding rings around her finger and shoved aside all thoughts of writer’s block to focus on her bank statement. She’d never considered writing about murder and mayhem, until the past couple months when her husband had given her a steady supply of material. During their eleven year marriage, she’d strived to be the best wife and mother she could, which didn’t stop Roger from leaving her alone with three kids in a neighborhood full of lecherous men, and other assorted lunatics, while he moved in with Cynthia.
Her current thoughts lay scattered like the nacho crumbs that littered the hardwood floor. No wonder her shorts were getting tight, she ate cheap junk food every time she called to ask Roger for money.
She compared the statement to the balance in her chequebook and willed the numbers to increase exponentially. They refused to budge. Clutching her resume reluctantly, she sighed. As much as she wanted to make a living, the meager amount she earned writing didn’t pay the mortgage or feed and clothe her kids. She needed to make the flying leap to get a real job before school started, but the thought of leaving her kids to go to work every day made her palms sweat.
For the past eleven years, the kids had been her entire world. Her kids and her writing. With Roger gone, she was alone in a strange town. Who would look after her kids while she worked? Who’d cut the crusts off Shawn’s peanut butter sandwiches and make sure Gina didn’t wait too long to go to the toilet?
She wiped away a tear. Getting emotional wasn’t going to help. If things didn’t turn around soon, she’d have to call her parents for a loan to get her through and listen to them plead with her to move back to Seattle.
The screech of metal on metal came from outside the window and grated on her nerves as it had the entire afternoon. One of her neighbors was outside tinkering with his truck. She tucked her lower lip between her teeth to stifle a scream. Already on the verge of a complete breakdown, the noise pushed her closer to the edge with each passing minute. She reached up and clutched her hair with both hands.
“Mom,” Shawn, her middle son, called up the stairs. “Dad’s on the phone.”
She winced. A second phone sat on her desk, ringer off. Normally, she was thrilled to talk to other grown-ups, any other grown-ups, just not Roger Stephens. She still harbored a few hard feelings, more like a truckload after he’d left her.
From what she’d learned, Cynthia Mathias was not only rich, but a dozen years older than Roger. Lucy wasn’t surprised when they broke up less than two months later. When Cynthia died, however…
Lucy shuddered. No one deserved to be raped and bludgeoned by an intruder while alone in her penthouse apartment. She’d read every news clipping she came across trying to make sense of Cynthia’s murder. At least with the kids around for the summer, Lucy was never alone and the odds of such a crime happening to her seemed remote.
When Roger had brushed off her concerns after Cynthia’s death, Lucy assumed they’d parted on ugly terms. Since Cynthia’s husband was a multi-millionaire, their breakup was probably over money. Roger didn’t have enough cold, hard cash to keep up Cynthia’s lifestyle, or her appearance.
“Mom,” Shawn shouted again. “Phone.”
“I got it.” Keeping the enthusiasm out of her voice when she did answer the phone was easy, her husband aroused emotions she’d rather not deal with. She choked back the anger, careful not to say anything stupid.
“Hey, sweetie.” Roger only called her nice things when he was drunk or wanted something. Mid-afternoon on a Wednesday, drunk was probably out. “How’s everything going?”
Lucy cringed and her stomach clenched. “Fine. Why?”
“Wow, don’t sound so suspicious. Did I catch you writing or something?” Roger chuckled then coughed and cleared his throat. “I’ll cut to the chase, Luce, I want to take the kids next week.”
“What?” Lucy fumbled the phone and let her resume waft to the floor. She hated the way he called her Luce. She was definitely not “loose”. Another loud screech of metal on metal from outside made her flinch and clench her fist. “Have you been drinking? The only reason you usually call is to say you can’t see them.” Leaving her to sop up the tears and patch their broken hearts.
“I’m sure that’s the way it seems. I do have to make a living after all.” He hesitated. “Anyway, I’d like to take the kids on vacation next week.”
She sucked in a breath and waited for the punch line. When one didn’t come, she pinched her leg. Nope, not dreaming. “For the whole week? Are you serious?”
Roger snorted. “Of course I’m serious. Tanji and I will pick them up Sunday and take them to the cottage for a few days.”
Like they had last summer when they were still a family only this time his new girlfriend would replace her. She swallowed back the hurt. “This Sunday?”
Roger hesitated then suddenly seemed more relaxed. He must have taken a few deep breaths. “Yes. I figure they should have a little vacation time after all the crap we put them through.”
We? Lucy’s face burned. He’d put them through all the crap and, now had the nerve to thrust part of his guilt on her. “Right. You’re going to take the kids, dump them with your parents and parade your new girlfriend all over the beach.”
Tanji was girlfriend number three, or was it four? At least Cynthia’s death hadn’t seemed to affect his libido much.