I love my bed- Tricia McGill.

Winter is drawing in in my part of the world and as I snuggle down beneath my nice warm sheets and blankets I appreciate, once again, how lucky I am. There have only been a few nights in my life when I have not slept in the comfort of my own bed. On a cold winter’s night when I am snug and warm under my blankets I think of all the people out there in the world who do not have a bed to climb into, but are forced to spend their nights huddled up on cold footpaths or park benches. To my mind it is a roaring disgrace that in countries like mine where we are supposed to be civilized and care for the less fortunate in our society, that there are far too many homeless living on the streets of the cities.

I’ve just been out to my letter box which contained a flyer from The Salvation Army. It states that 44,000 young Australians are homeless this year, and 53% have diagnosed mental health conditions. Thank God there are charitable organisations doing their best to provide hot meals and a warm place to sleep to these unfortunate folk.
What I find disgraceful is to hear that some of these homeless people are Veterans of one war or another. Destitute and suffering from post-traumatic stress disorder most are unable to settle into normal lives after the horrors they lived through while fighting for their country.

Beds have played a large part in most of our lives. I can recall how I pulled the sheet over my head as a child knowing this rendered me safe from ghoulies and ghosties and things that go bump in the night. I can remember my first night of marriage as if it was yesterday. Full of the joys and happiness of a young new bride, unaware of what life held. Then there was the horror of waking up in the middle of the night in a hospital recovery ward with a mask over my face as I came out of the anaesthetic induced sleep.
All things considered I have not really had many bad experiences in my bed—well to be honest—practically none. My bed has always been a place of warmth in winter, and comfort in times of sickness.

As a writer of historicals and time-travels, different types of sleeping arrangements have played a large part in my stories.

In my Wild Heather series where they travel back to Scotland in the 1050s I have them sleeping on a bed of straw covered by animal hides. Quite primitive, but cosy enough beneath the sheepskins. In those times only the Laird or his close family would have separate sleeping quarters. The rest of his clan slept in the main hall, which didn’t leave a lot of room for privacy.
In my Settlers series set in Australia of the early 1800s they weren’t so bad off and by then probably had proper beds to sleep on, although these would still have been furnished roughly with animal hides and rudimentary bedding. But imagine the plight of the convicts transported from England. The conditions on those early sailing ships would have been horrendous. It’s no wonder a lot of those transported didn’t make it, especially the children 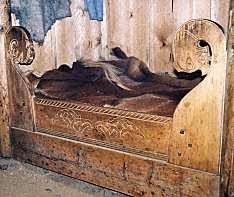 Viking beds were probably lined with straw. An interpretation of an open bed at Eiríksstaðir is shown to the left. It's lined with straw and covered with an animal skin.

On either side of the central corridor (between the roof support columns and the walls) in the Viking longhouse, raised wooden benches topped with wooden planks ran the length of the longhouse. They provided a surface for sitting, eating, working, and sleeping.

Taken from this site:
http://www.hurstwic.org/history/articles/daily_living/text/longhouse.htm

The following information on medieval sleeping arrangements is taken from this site:
http://www.oldandinteresting.com/medieval-renaissance-beds.aspx

In the 14th century the poorest people slept on a straw mattress on the floor with whatever warm covering they could get. The richest houses had large elaborate beds, with ornamented canopies, richly-embroidered hangings, and soft featherbeds under the fine linen sheets. They were among the most splendid pieces of furniture in a large house, and noblemen often had their emblems embroidered on the hangings. They were a comfortable place to meet for a chat, or receive guests, while displaying an abundance of fine textiles. They could be social gathering places at night too, as visitors of high status would be invited to sleep in a bed even if they had to share.
(Imagine inviting your guests to share your bed) 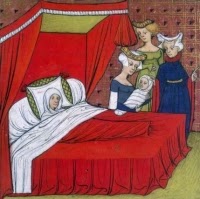 The picture from 14th or 15th century France shows a canopied, curtained bed with a head sheet laid over the pillow resting on a sheet-draped bolster. Head sheets were gradually replaced by pillowcases and are not usually mentioned after 1500. A pillowcase was always called a pillow bere (bearer) until about the 16th century, but this could mean various kinds of pillow cover, not necessarily a linen pillowcase matching the sheets.


So all in all, beds have played a large part in everyone’s life since the cavemen I guess. But I am so glad I have my nice cosy bed to climb into every night.

You can find information on all my books on my Books We Love page here: