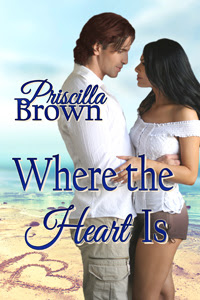 A contemporary romance set on a dreamy Caribbean island

This and my other contemporary romance novels are available on Amazon and on Kobo. For details, visit my Books We Love Author page.
www.bwlpublishing.ca/authors/brown-priscilla-romance-australia


Fiction writing and working with textiles are my creative interests. I attended a textile class where we layered differently textured fabrics and embellishments to assemble a small wall hanging. My piece was based on handmade felt. The next three layers were of frayed-edge organza in decreasing sizes from red through gold to white, this last with holes burnt into it for a different look. On top of these I randomly placed various sizes of kitchen foil scrunched into ridges and painted, and scraps of pretty fabrics formed into tiny flowers. Dabs of glue, beads and stitching with wool and embroidery threads held it all together.

As I worked, I thought how constructing fiction is similar, and how 'layering' concentrates on aspects of a manuscript, structuring them into a cohesive whole and bringing the story to life.

An early draft of Where the Heart Is was too long and such a mess that it had no chance of credibility as a publishable piece and demanded a major re-write. While the basic plot idea had potential, the story's 'building blocks' were at best shaky, at worst crumbling. I attempted this overhaul by employing a 'layering' process.

The first fresh layer concentrated on the two lead characters, whose motivations for their actions and emotions needed to be much stronger and more credible. What is Cristina's agenda on this particular island? Why is Cameron so cagey? Questions such as these led to the development of their backstories; in this novel, these personal histories became a layer in  themselves, only to be condensed and slotted in as the storyline proceeded. Another layer dealt with secondary characters, establishing their credentials for their presence and making sure they were there to move the story along while not allowing them to take over. I found several secondary and tertiary characters and plot episodes involving these to be superfluous; their removal resulted in a tighter faster-paced story.

A further layer worked on strengthening physical situations, including a hurricane, a hazardous motorbike ride in a forest, a risky sea incident, and intensifying the characters' responses to danger.

This led to heightening the emotional layers throughout the story. These can, perhaps especially in a romance, be sources of tension and conflict between the lead female and male characters. Such emotions may be temporary in reaction to an immediate situation, or they may include 'baggage' held due to past events and experiences, an undercurrent of strong emotions such a lack of trust, anger, confusion, insecurity, impacting the characters' relationships and actions. Cristina brings these and more to her relationship with Cameron.

Now the layer which holds it all together, like the glue, beads and threads.This involves fixing any plot holes, tying up loose ends, checking the ms for spelling, grammar and punctuation errors, and for repetitions and inconsistencies. The final layer for me, undertaken after the ms has been allowed to hibernate for some time, is a comprehensive re-read, extremely valuable as I always find something previously missed. The ultimate layer consists of the professional editor's revisions. 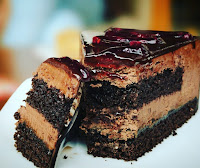 Layers are everywhere in our daily lives. Right now, it's getting cold so I'll put on a warm sweater layer, then I'm going to bake a multi-layer chocolate cake. After writing about layers, I deserve to eat them.