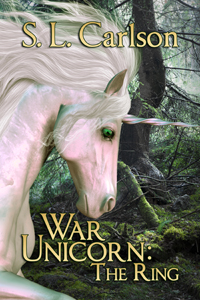 CLICK THE COVER OR LINK TO PURCHASE FROM YOUR FAVORITE RETAILER

Human Nature in Fantasy
by S. L. Carlson, YA fantasy author with BWL


What has been will be again,
what has been done will be done again;
there is nothing new under the sun.

If there is nothing new under the sun, whyever do I continue to write…new stuff? Plus, how can a quote written so long ago be relevant in today’s world of highspeed internet, spaceships, and modern forms of weaponry? It is as relevant as Christopher Booker’s surmise of there being only seven basic plots. For the Ecclesiastes quote, as with the seven plots, concerns human nature and character, not inventions or accomplishments.

Folk and fairy tales are all about human nature, even when morals vary from culture to culture. For example, thievery and trickery is a negative trait in northern European cultures, but in some Native American or Middle Eastern cultures, they are amusing and even admirable—e.g., the old adage “fool me once, shame on you; fool me twice, shame on me”.  The Brothers Grimm and Edward Lang rewrote folk tales they’d collected to accommodate the minds of their young readers. Also, the many stories in the volumes of Tales from the Arabian Nights were intended for adults-only, unless, like Disney’s treatment of Aladdin, they are sliced, diced, and rewritten for “the gentle mind.”


I own about one hundred thousand folk and fairy tales in print, and countless more on electronical devises. Decades ago I wrote my master’s paper based on folk tales. For me, these are fantasy quick-reads with pow factors, causing my mind to think about history, people, places, fantastical things, and human nature.


Years ago I thought to write about a magical ring but hesitated because of the popularity of LOTR. J.R.R. Tolkien was known for his love of Norse myths and legends. And then I read folk tale after fairy tale involving rings, one had a magic trait to transport, one provided food, and another made someone wearing it invisible. There is nothing new under the sun.


I wanted to write about a unicorn, but not the fluffy-duffy, rainbow kid-type. Take the opposite of that and what have you got? A war unicorn! Whoever thought of such a thing? And then I read about D&D war unicorns. It wasn’t much like my war unicorn, still…nothing new under the sun.


An author of fantasy (like me) takes a little bit of this and a little bit of that, eye of newt and toe of frog, throw them in a cauldron (or swirl them around in your brain sometimes for years), and out will come...