Men are off Cristina's essentials list during her working holiday at a luxury Caribbean resort.
But can the resort's zany charmer of a pilot break through her defences?

Carrots have received many mentions in literature. Grimm wrote a fairytale The Carrot King; Shakespeare mentioned them in several plays; Edward Lear in a limerick rhymed about a purchase of two parrots fed on carrots (the parrots who frequent my garden turned up their beaks at shredded carrot).

Real carrots for me are just another vegetable, arranged on a dinner plate or shredded onto salad, their colour cheering up the conglomeration of all that green stuff. Perhaps, like me, as a child you were told to "eat your vegies". If you did, something nice may come your way; if you threw a tantrum, you were sent to bed early. The old carrot and stick idiom.

Fiction writers use carrots as turn-the-page bait. A character wants something that's out of reach, but if s/he accepts the dangled  "carrot", for example, adjusting behaviour, overcoming a challenge, telling the truth, the desired outcome may be attainable. We want the reader to worry about the character; will s/he get this elusive something, and if not, what will happen? Tension, conflict, suspense.

In One Thousand and One Nights, each night Scheherazade tells the king a story. Leaving it incomplete, she promises to finish it the following night, so that he, keen to hear the endings, abandons his plan to kill her. Carrots save her life. 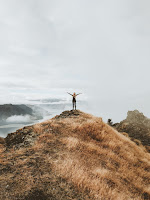 Cliffhangers are similar to carrots in that they encourage readers to continue with the story, eager to know what happens next. Writers use a chapter or scene with a dramatic climactic ending to raise the stakes for the characters: a question or situation unresolved, a physical threat or sense of foreboding or urgency, distressing information...scenarios which leave the reader in suspense.

In Where the Heart Is,  the cliffhanger is almost literal. After an evening of sexy dancing, the protagonists are perched on a dangerous cliff top. She badly wants to sleep with him, but won't until he reveals a secret she believes he's holding. He wants to sleep with her but won't because he's afraid of falling in love and she must return to her home country. The chapter ends with just three words from him, words which devastate her.

Enjoy the carrots and cliffs in your reading!  Priscilla