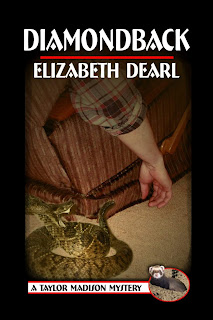 Muscles straining, I rowed.  My captor sprawled across the stern, stuffing a Twinkie into his mouth with one hand.  His other hand was occupied, pointing the business end of a revolver at me.  A wadded handkerchief sprouted from his left shoulder like a crimson carnation.

"Good goin', Doc,"  he mumbled, spraying bits of yellow cake against my neck.  "I'm impressed.  Little speck of a gal like you."

"Thanks,"  I said sourly. Not for the first time, I regretted a lifelong compulsion to prove myself.  A four-foot-eleven, ninety pound woman doesn't make it through the rigors and taunts of med school unless she can excel, scholastically and otherwise.  However, in the present situation I would have been much better off pleading feminine frailty.

I hadn't been kidding about the hole in that weather-beaten shell of a boat.  Frigid water lapped over my shoes as more of the rotting wood gave way.

He laughed.  "Guess it's time to get out of this wreck, huh?"

The huge man eased over the side and stood, the water level just below his knees, holding the gun and two plastic sacks.

I picked up my soggy medical bag and obeyed.  "What about the boat?"

Shivering, I watched the lake swallow my only means of escape.

We stumbled across the rocky shore and into the woods, me in the lead, a hard shove to the small of my back urging me along if I didn't move fast enough to suit him.  He'd chosen Gnat Island, named for its size, not its insect population, as his hiding place.

The tiny island, not even half an acre in land mass but studded with enormous pines, is a popular picnic spot for summer tourists.  I'd spent many a warm weekend here myself.  It was a good place to bring friends from Boston, come to pay a pity visit to their former college pal out in the boonies.  "No wonder you live here,"  they'd always end up saying.  "So peaceful."  And instead of scorn for the colleague who'd chosen to cast aside big-dollar specialty medicine in order to practice as a lowly GP in a place no one had ever heard of, they'd carry a little envy back to the city.

Winter is a different story, the main shore lined with deserted summer cottages, the island abandoned.

We reached a small clearing and he sat down on a carpet of pine needles, motioning for me to do the same.

"It's getting dark,"  I said.  "Want me to find some fallen branches and build a fire?"

"Good try, but no thanks.  Don't want you signaling for help."

"That wasn't my intention.  You brought me here to give you medical treatment, but I can't do that in the dark."

"I've got a flashlight."

"Fine, but that doesn't provide any heat and I'm freezing.  Aren't you?"

I could believe that.  Fat is a great insulator, and this guy must have weighed over three hundred pounds.

"Well, I do get cold, and you don't want my hands shaking when I dig that bullet out of your shoulder."

His eyes narrowed.  "How'd you know it was a bullet?"

"Because you're Hank Nelson.  Don't look so surprised, you've been all over the news.  Bank robbery, two guards dead, you wounded."

"Not smart enough to lock my office door when I closed up this afternoon."  I was gathering twigs as I spoke.  "If you had let me take care of you there, you'd be back on the road by now."

"Told you, I had to find a private place, lay low for awhile.  Too many cops on my trail.  Lucky I found that old boat when I ditched the stolen car."  He thought things over.  "Go ahead and build your fire, Doc.  I guess we're far enough into the trees that no one will see the light."

No one would see my fire if I built it at the edge of the island, not in winter.  The main shore across from us would remain abandoned until late spring, but I didn't see the point of sharing that information.  "Toss me your lighter."

He reached for his pocket, then stopped.  "Now, how'd you know I'd have a lighter?"

"You're a smoker.  I can smell tobacco on your clothes."

He handed over the lighter.  "You oughta be a detective, Doc.  Say, what's your name, anyway?"

"Memory problems, Hank?  You must have read the shingle outside my office, or you wouldn't have known I was a doctor."

"Nunya?  Weird.  Is that short for something?"

"Yes, it's short for nunyabizness.  None of your business, get it?"

He grabbed my wrist so hard I thought I heard a bone crack.  "Get this, Doc.  I don't like being messed with.  If I ask you a question, you'll damn well answer it."  He showed me the revolver, blue steel gleaming in the flickering light.  "This makes me boss.  Get it?"

"Got it."  I hated it that my voice trembled.

I rummaged through my bag, produced a syringe.

"No way.  You're not shooting me up with anything.  How do I know you wouldn't drug me?"

He rolled his eyes.  "Well, duh.  So you could take my gun and run for the cops?"

"A pleasant idea,"  I admitted,  "but impossible.  I told you, I can't swim.  How could I run anywhere, except around and around this island?"

"Your call."  I put the syringe back in the bag.  "But this is going to hurt like hell without anesthetic."

He tapped my cheek lightly with the barrel of the gun.  "Better be sure you don't make it hurt more than necessary.  No games."

Hank never flinched as I worked to dislodge the bullet, but sweat stood out on his forehead and his jaw  tightened.  When I had finished and was bandaging his shoulder, he pulled a pint of whiskey from one of the plastic bags and took a swallow.

"You know, Doc, I was plenty surprised that you could row that boat like you did.  How come a little thing like you is so strong?"

Remembering his earlier anger, I bit back a sarcastic reply.  "I was on a rowing team at college.  These days I work out with weights.  Sometimes doctors have to lift or move patients, and I don't want my size to interfere with my ability to do the job."

"Rowing team?  That's funny, thought you couldn't swim."  He fiddled with the revolver in a way that made me very nervous.

"Swimming and rowing are two different things,"  I said lightly.

"But what if you'd fallen in?"

"I wore an inflatable vest.  There, that'll hold you,"  I added as I taped off the bandage then sat back, as far away from the gun as possible.

"How come you never learned?  To swim, I mean."

"Why does it matter?"

"Just curious.  You come across as being real athletic, and you don't seem like a chicken to me.  I mean, you never even screamed when I snatched you."

Of course not, I thought bitterly.  Screaming was yet another feminine weakness I had overcome.  Never mind that in this case it might have helped me out of a jam.

"When it comes to swimming, you could call me a chicken.  I tried to learn when I was seven.  Problem is, I can't float.  High density."

"The more muscle in a body, the higher the density, and dense objects don't float.  I've always been slender, wiry, very little body fat.  I sink like a rock."  Memories of my father pushing me back into the water.  Arms flailing, legs scissoring, struggling to the surface for a gulp of precious air . . .

"Good. Did you ever take a Red Cross lifesaving course?"

"Well, since the boat's gone, I was just wondering how you plan to get us both off this island."

He smiled, and I knew that smile implied something I didn't want to hear.  Before he could put the thought into words, I leaned forward.  "Your bandage is coming loose.  I'd better add some tape."

Women joke about their purses containing everything but the kitchen sink.  I'm fairly sure my medical bag has a sink in there somewhere.  Fully stocked, it weighs about fifteen pounds, and in one motion I brought it up and connected with the side of Hank's thick skull.

The gun rose, wavered, tumbled from his grip.  He collapsed in slow motion.

"What the hell –?"  Slurred and bewildered, the question drifted out of the darkness to my right.

"How ya doing, Hank?"  I was a little breathless, but not much.  I can bench press nearly twice my own weight, and although Hank exceeds that limit by close to one hundred pounds, I hadn't been forced to lift him – just to drag him a ways.  "Valium injection, twenty milligrams.  Should have doubled it for someone your size, but what with the Hippocratic oath and all, I was trying to avoid killing you.  Don't ask me why, since you were planning to kill me.  It's a doctor's curse."

"Thought you never got cold, Hank."  My teeth were chattering despite the exercise.  "Guess even all that extra fat can't keep you warm in December lake water.  Sure does make you float like a cork, though.  Now, shut up, I'm busy."  Tightening my grip on his belt, I kept kicking toward the main shore.