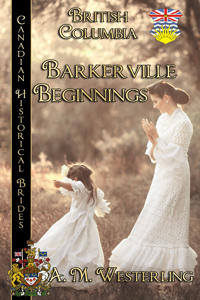 A single mother running from her past and a viscount running from scandal meet in the rough and tumble gold rush town of Barkerville. (Available at your favourite online store HERE.)

Four years ago, my wonderful publisher BWL Publishing invited me to participate in a project in honour of Canada’s 150th birthday. The Canadian Historical Brides Collection is comprised of twelve books, one for every province and territory and each book is the story of a bride who contributed to the building of Canada. Our only stipulation was that the book had to be a blend of fact and fiction. 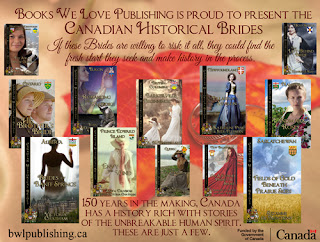 Each participating author could choose which province they wanted to write about and I was lucky enough to snag British Columbia. I say lucky, as British Columbia is one of our favourite vacation destinations and it wasn’t too difficult to come up with a location in which to place my story. Eventually I decided on the ghost town of Barkerville that sprang into existence during the Cariboo gold rush. My husband and I have visited there a couple of times over the years and I thought it would be a wonderful setting for the story of Rose and her little girl Hannah, and Harrison.

After gold was discovered in 1861 in Williams Creek in the Cariboo, thousands of men and women made the trek up the Fraser River, through the Fraser Canyon, north to what is now Quesnel and from there east into Barkerville. At one time, this town was thought to be the largest settlement west of Chicago, with an estimated population of 10,000! With such a large influx of people, in 1861 the Royal Engineers were given the task of building the Cariboo Road. By 1865, the road made it possible for mule trains, freight wagons and stage coaches to serve central British Columbia. When completed, it was considered one of the wonders of the world. Today you can still see remnants of the road just outside of Lytton. 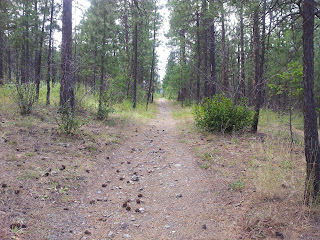 As an author of one of the Canadian Historical Brides books, I had to incorporate real people so I did. ie Wa Lee, who gives Rose a job in his laundry, Judge Begbie, (known as “The Hanging Judge” and doesn’t that tweak your interest!), Madame Fannie Bendixon, the hotelier and saloon keeper (who may or may not have run a brothel!) who also offers Rose a job, Dr. Wilkinson who treats the injured leg of Rose’s daughter Hannah, and Wellington Delaney Moses, the barber, because Harrison needed a shave after being out in the gold fields.

I’ve been to Barkerville so I wanted to mention the lonely grave you drive past on your way in from Quesnel. Here is Rose’s impression as she passes by:

The wagon slowed as the road neared a fenced grave, enough that Rose could read the headboard: Charles Morgan Blessing.
“Lonely spot to be buried,” Harrison commented and he doffed his hat as they drove past.
Rose nodded. “It is.” A chill tiptoed down her back at the forlorn sight, a reminder of the fragility of life in this wilderness. She craned her neck for one last glimpse before the road twisted away.

I was also quite taken with the wooden sidewalks so of course I had to mention those as well:

“Looks like we’ve arrived,” said Harrison as a cluster of buildings came into view. Once again the mules, sensing the end of a long day, picked up their pace and the wagon bounced and rattled down the last little bit of the Cariboo Trail.
Rose hadn’t known what to expect but her first view left her numb. This was Barkerville? The town that gold built? This jumble of wooden, mostly single story buildings tottering on stilts alongside a wide, muddied creek? Surrounded by steep hills stripped bare of trees? How unattractive, brutally so.
The road through town was in poor shape, rutted and puddled with patches of drying mud. In consideration for pedestrians, raised wooden walkways fronted every building like planked skirts. Rose could only conclude the creek must flood frequently. Her poor boots, already soaked through once since embarking on the trip, would certainly be put to the test here.
The closer they came, the more her heart sank. What had she got themselves into?

Here are a couple of pictures of Barkerville today. The second picture gives you a good idea of the wooden sidewalks. 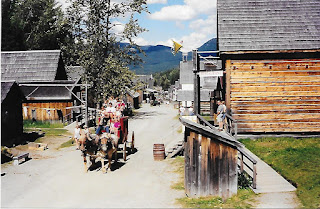 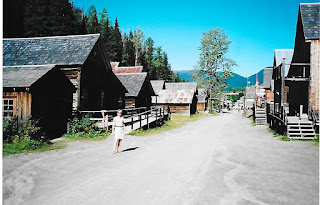 As an author of historical romance, it’s my job to place my readers in the proper time frame and I hope I’ve accomplished that in Barkerville Beginnings!