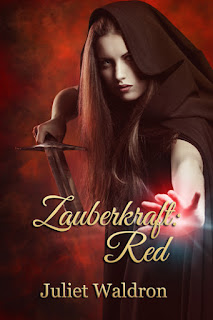 Austrians and Bavarians have a divine pair of antidotes to our American diet of Christmas sugar. The best known is the Krampus, a German/Austrian devil who appears at winter celebrations, usually on December 5, which is also Saint Nicholas day. In Bavaria and in the territories of the old Austro-Hungarian Empire, he’s long been the Dark Companion to their Good Spirit of the season, the Christian St. Nick. 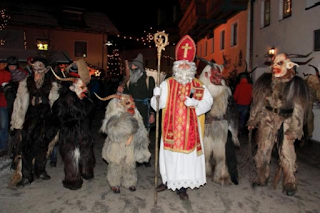 Saint Nicolas & "Friends"
Krampus is doubtless a good deal older than the red-coated, crozier-toting saint, with his horns, furry pelt, and long, disgusting tongue. Krampus arrives to punish bad children, right beside Saint Nicholas, in, as some commentators have noted, a kind of bad cop/good cop routine.   He carries chains which he shakes threateningly and a bunch of birch branches, which he threatens to use on the backsides of all evildoers. 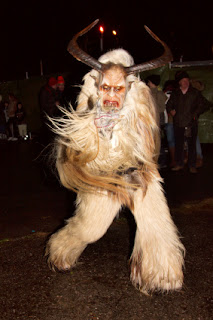 Old Christmas cards from the region, especially from the 19th Century, show Krampus—sometimes portrayed as a female—delivering spankings in smirking 19th Century bondage scenes. However, I believe that Krampus has always been male, because of his enormous horns, that universal signifier of masculine prowess. In this case, the horns are trophies taken from the buck Steinbock, (Capra Ibex) which are an integral part of the traditional costume. 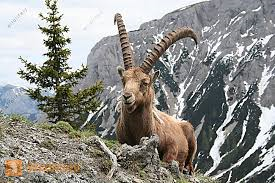 Steinbock buck
Krampus has survived from pagan times in Austrian and Germanic lands despite more than a thousand years of disapproving Christianity. Soon, this magnificent horned god will dance in the streets as part of the celebration that lifts human spirits in a cold, dark time.  He does not dance alone, though. Long ago, he may have had a feminine companion.

Nature, in the form of the Teutonic Goddess, Frau Perchta or Berchta, is another seasonal deity. This Lady has two faces. In spring and summer she is Berchta, the shining one, dressed in white and crowned with flowers, who brings fertility to the fields and to the animals. Sometimes taking the form of a swan or of a lovely woman with one webbed foot, Berchta cares in a beautiful secret garden for the souls of suicides, the unbaptized and still born children, and those who have not been buried properly. This soul-shepherd could be a friend on a very personal level, too, for there are stories about her entering homes in the night and nursing babies in order to help their tired mothers get much-needed sleep. 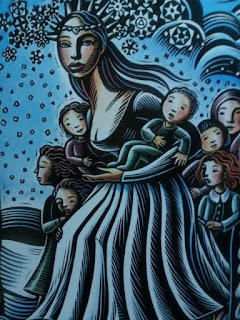 In winter time, however, Perchta is no longer generous or kind to her human children. When The Wheel of the Year turns, she wears a new face, one that is old and cruel. Times past, as the Spinnstubenfrau, (Spinning room wife) this goddess would punish a woman severely if she had not finished all her spinning and/or housecleaning (*I'm doomed) by the Feast of the Epiphany--January 12.  Beneath the crone's dress, is a long knife she'll gut you with if you displease her. Every winter day she whips the land with ice, winds, and snow.

In the howling of the gales you may hear the Wild Hunt blowing over your head--and Perchta, a winter witch, leads them, surrounded by lost souls. She is sometimes accompanied, it has been said, by the Capital "D" Devil himself. The birch tree is sacred to her in both aspects, and is represented by the rune Berkana. 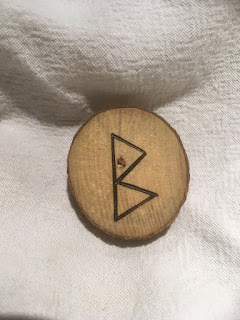 Perhaps, once upon a time, the demonic Krampus creature was Perchta's mate. (He certainly looks like the Devil, doesn't he?)  The Old Woman haunts the time days before Epiphany. If you want to make friends, she enjoys a bowl of hot cereal left out for her, but, better yet, I've heard, is a glass of schnapps or brandy. 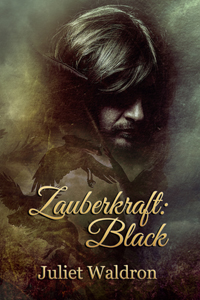 For the second part of my “Magic Colours” series I decided to employ a shape-shifting creature who lived in the Austrian Alps. The Krampus legend was an obvious choice, although I've altered it to fit the needs of the story.  Shape-shifters are limited to a single form--the werewolf being the prime example--but I gave my creature carte blanche. My hero can assume the shape of any animal that lives on his mountain.

In Zauberkraft Black, a disillusioned soldier, Goran, returns home from the Napoleonic wars to find his family estate semi-abandoned in the wake of that long and devastating European war. The Austrians changed sides--first fighting against Napoleon and then siding with him, an experience that felt like a betrayal to many. The Year without  Summer (1815-16), just passed, has also taken a terrible toll. Sudden climate change, brought on by a gigantic volcanic eruption on the other side of the world, causes crop failures and starvation all over.

Not only unseasonable cold followed the now famous Tambora eruption, but endless rains.  In the high mountains, this caused devastating avalanches. One on the Heldenberg (Heroes' Mountain) kills Goran's mother at their alpine family estate. Now, this wild, beautiful place--once, for Goran, full of happy childhood memories-- is tainted with darkness.

During his first hours on the land, while aimlessly wandering, Goran stumbles into a seasonal celebration among his tenants. It’s a traditional Summer Solstice party, with food, drink and a hint of sex, but instead of these simple pleasures, an ancient ceremony of soul-joining now awaits the newly returned young master.

See all my historical and fantasy novels at: