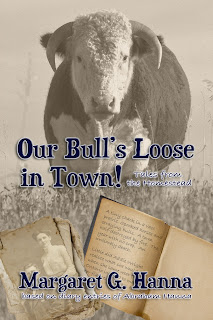 In case you hadn’t notice, I write. At least, I try to write. It isn’t easy, not for me, anyway. Questions abound – What do I write about? Will it make sense? Is what I’ve written what I really want to say? Will anyone read it? Will anyone care?

The pundits say, Write for yourself and the readers will come. Perhaps they’re right.

As of now, I am writing (trying to write) an historical novel, except it isn’t really a novel. Like many movies, it is “inspired by . . .” because it is more or less the life of my maternal grandmother after she immigrated to Canada from England in 1912.

The facts are no problem. Creating the scenes around the facts is not too much of a problem. Finding Mary’s voice is the problem.

Unlike my maternal grandmother, who died when I was eight, I knew my paternal grandmother, Addie Hanna, very well. I had no problem finding her voice when I wrote "Our Bull's Loose in Town!" Tales from the Homestead. Check it out, but be prepared to meet an opinionated woman who doesn't hesitate to tell it like she sees it.

It isn’t that easy. I struggled but what appeared on my computer screen just didn’t sound like her or at least how I imagined she would write. Then someone suggested I uncap my good old fountain pen from my high school days (no ball point pens back in 1912) and write something by hand. With ink. On paper. As Mary would have done.

I couldn’t believe it – Mary’s voice appeared like magic. It’s almost, but not quite, a stream-of-consciousness voice and why not? This is a diary, after all, and a diary is where you pour out your heart and soul.

I wrote the first several diary entries by hand with fountain pen and then transcribed them to computer. Her voice is now ensconced in my head so I can write most diary entries directly on the computer but whenever I run into trouble, when her voice eludes me, I go back to fountain pen and paper and, lo and behold, she is back with me.

This isn’t the first time I discovered the mind-hand connection can be messed up by technology. Back in university days, I wrote my term paper drafts by hand and then typed them (anyone remember typewriters?) before handing them in. One day, I had a Eureka moment – why don’t I “write” the drafts directly on the typewriter before doing cut-and-paste the old-fashioned scissors-and-tape way. I inserted the first sheet of paper into the typewriter, rolled it through the platen and poised my fingers over the keyboard.

Nothing! That piece of paper stared back at me and dared me to put a single letter, never mind a word or sentence or paragraph, on it. It was as if the neural circuit connecting the words in my mind to my fingers above the keyboard had suddenly been disconnected. That first draft was a struggle to put on paper but eventually the new mind-hand circuit grew and it was no longer so difficult.

Then came the computer era. I acquired my first computer in 1982 – two floppy disk drives, 64K memory, 84-character green screen and a word processing program that required embedded dot-commands to format the text. Transitioning from typewriter to computer would be a piece of cake, or so I thought.

Ha! The first time I tried to write, that dratted green cursor blinked back at me, daring me to put a (virtual) word on that (virtual) paper. I could hear it laughing at me. Once again, it seemed as if the mind-hand circuit had been disconnected and, once again, I had to build a new one.

Now, it is normal for me to sit at my computer and type away. The words flow with little effort (okay, not always, but mostly) from what’s in my mind to what appears on the (virtual) paper.

Which brings me back to my recent discovery, that the technology I use has helped me find Mary’s voice. Why is that?

If there’s a neuroscientist out there reading this, perhaps she can explain.