The Man With The Hat 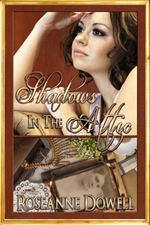 The Man with the Hat

Buying a first home is exciting at best. Our purchase was just that. An older home, needing much work, but it was ours. The first night my husband went back to work after we moved into our almost century old home, I went to bed exhausted, but happy.

Just as I dozed off, a noise came from the basement.  Our dog started barking. Scared half out of my wits, I picked up the phone and called my sister, who lived two streets away. She sent her husband over to check things out.

Doug looked around the house and didn’t see anything unusual. However, my dog refused to come into the dining room.  She stood in the hall growling and barking. Normally, a quiet dog, this was unusual for her.  Doug called her from the kitchen. She didn’t move. I called from the living room. She refused to come to either one of us. Her gaze focused on something across the room. Neither Doug nor I saw anything. Surely, if it was a mouse, she would have chased it. Her actions perplexed us.

Doug, seeing my fear, suggested we pack up my kids and spend the night at their house. I’m sure he just wanted to go home to bed.

In the morning, we returned home and all seemed normal. All day our dog ran through the house with the kids. Nothing distracted her.

That night the same thing happened. This time, as Doug started down the basement steps, he stopped, came back, and took a knife out of the kitchen drawer.

He swore someone was watching him. He checked out the basement and everything seemed normal. Again, we spent the night at their house.

This went on for several nights. Doug came over and took us to his house.  The nights Roger was home we didn’t hear anything and the dog remained calm. Roger insisted it was my imagination, but Doug confirmed the actions of the dog.

When Roger went to work, it happened again. This time Doug brought a tape recorder to our house and set it up in the dining room before we left.

The next day, we played the tape.  Sounds of our dog growling and barking were predominant, but in the background were other sounds that we couldn’t identify. Sounds like chains being pulled across the floor and others noises sounding like scratches and moans.

No doubt, Doug was getting tired of picking us up every night, and I’m sure my sister, although she didn’t say anything, was tired of us intruding. Besides, I I wasn’t crazy about waking my kids every night. Eventually, I’d have to stay home. Noise or no noise. I’d just have to get used to it. This was our home after all. Somehow, I tuned out the noises, quieted the dog and managed to sleep.

A few days later, my three daughters played upstairs in their room.  They screamed and ran down stairs.  “There’s a man up there,” they cried in unison.

Since we’d been home all day, it was impossible. But to appease them, I went up to check.  They insisted a man with a hat had been watching them.

Of course, no one was there.  I explained it was a shadow of a bird going past the window.   Although the room felt much colder than normal, and I had an eerie feeling.

My daughters described him clearly, a tall man, in a brown suit coat, wearing a hat. They couldn’t make out his face, but they said he watched them play.

After that, they refused to play upstairs, and I often had a hard time getting them to go to bed at night.

Up until then things had been normal during the daylight hours. Now it seemed our nightly visitor had decided to appear when it was light out, too.

Also, until then, Roger thought it was my vivid writer’s imagination.  That is, he did, until one day, he was working in the basement.  He came upstairs, white faced.

“I just saw a man wearing a hat watching me. At first it was a shadow. But as I stared at it, his form became clearer.”

That shook me up. He described the man the same as the kids, we had a ghost. Roger now realized the noises weren’t my overactive imagination

I finally met some of the neighbors and told them my feelings of being watched.  I didn’t mention the man.

One neighbor said it was probably our nosy neighbor looking in the windows. I knew this wasn’t the case, but didn’t elaborate.

I asked another neighbor about the people who lived there before us.

“Oh, a nice old couple lived there. The wife died a long time ago. Her husband, John lived alone for a long time,” she said.

Later I found out John died in the very bedroom I slept in.  Eventually I told my friend about some of the things that were going on. I asked about John and she said he was a nice old man, who kept mostly to himself. “He loved to work in his garden and yard. Funny,” she said. “He always wore a brown suit coat and a hat.”

John was our ghost. He appeared many times after that. Roger often saw him, especially when we remodeledthe kitchen. One of my sons said John used to sit on a chair upstairs and watch him play.

I never saw John, but I heard him and often smelled cologne or after shave. Several years later he simply disappeared.

You can find all of my books here.