The story behind the photo...by Sheila Claydon 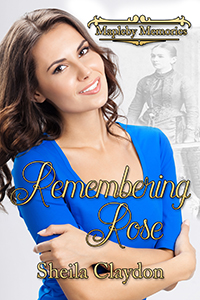 Click here for my BWL page
Remembering Rose is very special to me because it is my take on a family history. Not my family (although I might get to that eventually) but that of another family.
It all started when I found a sepia photo in a box of jumbled mementos. The young woman at the centre  was mesmerising, not because of her looks, although they were striking, but because of her vivacity. And it was obvious from the faces of those around her, that they were equally entranced. Of course I will never know what she was saying any more than I will ever know why she was standing while the people around her were sitting on the ground watching her. Were they playing a game like charades? Had she just jumped up and suggested they all stop lolling around and go for a walk? Was she reacting to something the blonde curly-haired child next to her had done? The only thing I do know is that it was taken in the summer because some of the men were wearing striped blazers and straw boater hats, and the women's dresses seemed to be styled from light, summery materials.
Like all photos taken in the days before the ubiquitous cell phone camera, there had to be a story behind it. In the late 1800s it wouldn't have been taken on a whim, so maybe the group had been posing and the photographer had grabbed a final photo just as the woman jumped up ready to do something else. I was intrigued enough to store the image in my head but not quite intrigued enough to write about it until, many years later, I was shown a photo of the same woman as an old lady. The contrast was both shocking and heartbreaking. What was it that had changed that vibrant young woman into somebody so thin and melancholy.  What had life done to her? And her husband too. In the sepia photo he had been handsome and dashing with luxuriant whiskers and his straw hat tilted at a jocular angle. Now he looked old and tired and his hands were swollen with arthritis.
The writer in me kicked in and I began to ask questions. The result is Remembering Rose. A fiction of course, but with enough of their real story woven into it to ensure they are never forgotten. Because their's is a story of love...real love, not the fleeting kind that runs as soon as it encounters problems...and consequently the love experienced by all the other people in the book is the same. The blurb on the back sums it up:
Rachel has a husband who adores her, a beautiful baby daughter, and an extended family she can rely on, so why isn't she happy? She doesn't know and nor do the people who love her. Only Rose understands but she is trapped in another century. To help Rachel she has to breach the boundaries of time itself as well as risk exposing the truth of her own past. When echoes from that past begin to affect other people in the village of Mapleby, things suddenly become a lot more complicated. Can Rachel put things right without giving away Rose's secret?
Because I needed a background for Rose's story I invented the village of Mapleby and the cottage where she lived as a child, and when I did that, Mapleby itself pulled back the curtain that separates us from the past and the future and told me Rose's story. And because it told me the story of so many of the others who live there too I soon found myself embarking upon a Mapleby Memories series. Remembering Rose is Book 1 and Book 2: Loving Ellen will be published in February. Although it's part of a series, it is still a stand alone book, but to really understand the village and the people who live there, you need to listen to Rose.
And if you do read Remembering Rose you might be able to guess who the heroine of the next story is going to be. A clue. It's not Ellen because there isn't an Ellen in Book 1. Have I intrigued you enough?
Even better is the fact that BWL has just updated the cover for Remembering Rose, ready for a relaunch alongside Loving Ellen, and the new image really does look like Rachel, who is the other heroine of the story. The cover for Loving Ellen is even better and I'll be showcasing that next month.
Posted by Sheila Claydon at January 14, 2021