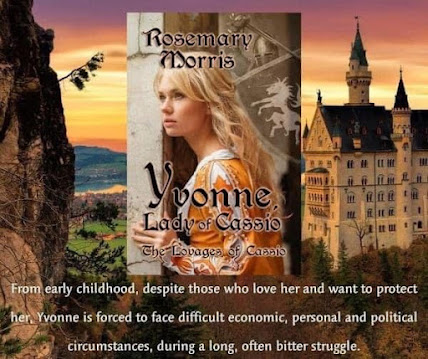 To learn more about Rosemary please click on the image above. 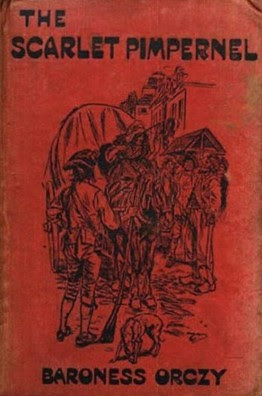 I am a fan of well written historical fiction which recreates past times. After I read Baroness Orczy’s novels about her gallant hero, the scarlet pimpernel, I became curious about the author’s life and times.

The Scarlet Pimpernel Fiction and Fact

Those French men seek him everywhere.

The Scarlet Pimpernel, Baroness Orczy’s most famous character, is Percy, the gallant daredevil, Sir Percival Blakeney Bart.  He is the hero of her novels and short stories set in The French Revolution, so aptly nick-named The Reign of Terror.

Orczy was a royalist with no sympathy for the merciless Jacobins who spared no efforts to achieve their political ambitions.  Historical accounts prove everyone in France was at risk of being arrested and sent to the guillotine.  Orczy’s works of fiction about the Scarlet Pimpernel display her detailed knowledge about Revolutionary France and capture the miserable atmosphere which prevailed in that era.

As I mentioned in my previous article in Baroness Orczy, in Vintage Script, Percy revealed himself to Orczy while she was waiting for a train at an underground station.  She saw him dressed in exquisite clothes that marked him as a late eighteenth century gentleman, noted the monocle he held up in his slender hand and heard both his lazy drawl and quaint laugh.  Inspired by their meeting she wrote The Scarlet Pimpernel in five weeks.

On the second of August 1792, Percy founded his gallant League of Gentlemen composed of nine members.  When ten more members enrolled in January 1793 there was “one to command and nineteen to obey.” Percy and his league saved innocents from the French Revolutionary Government’s tool, Madame Guillotine.

London society speculated about the identity of The Scarlet Pimpernel but, with the possible exception of the Prince Regent, only the members of Percy’s league knew his true identity.

Percy, a man of wealth and influence well-acquainted with the Prince Regent, heir to the throne, married Marguerite St. Just, a French actress.  Until Percy discovered Marguerite was responsible for an aristocratic family’s death, he was an adoring husband.   Percy kept his alias, The Scarlet Pimpernel secret from Marguerite for fear she would betray him.  Still loving Marguerite despite her crime, he feigned indifference, treated her coldly, shunned her company and acted the part of a fool so successfully that he bored her.  However, Marguerite discovered the truth about Percy and saved his life.  After the romantic couple’s reconciliation, Marguerite is mentioned as a member of the league in Mam’zelle Guillotine.

At the beginning of each of Orczy’s novels about The Scarlet Pimpernel and his league, the current events of the French Revolution are summarised.  Thus, Orczy weaves fiction and face by not only featuring English and French historical figures such as Robespierre, d’Herbois, The Prince of Wales, and Sir William Pitt, the younger, but by making use of historical events.  For example, in Eldorado Orczy describes the Dauphin in the care of the brutal shoemaker, Simon, who teaches the prince to curse God and his parents.

Amid horror, Orczy uses romance and heroism to defeat evil, as she did as a child when playing the part of a fearless prince while her sister acted the part of a damsel in distress.

Orczy spent 1900 in Paris that, in her ears, echoed with the horrors of the French Revolution.  Surely, she had found the setting for her magnificent hero The Scarlet Pimpernel, who would champion the victims of The Terror.   But why did she choose such an insignificant flower for Percy’s alias?   It is not unreasonable to suppose a Parisian royalist organisation’s triangular cards, which were hand painted with roses that resemble scarlet pimpernels, fuelled Orczy’s imagination.

Further fuel might have been added by a man called Louis Bayard, a young man with similarities to the real life Scarlet Pimpernel, although he might not have been motivated by Percy’s idealism

William Wickham, the first British spymaster, engaged the nineteen-year old Louis Bayard.  In the following years, Louis proved himself to be as elusive as Percy. Like Percy, Louis had many aliases. Not only did Orczy’s fictional hero and Louis fall in love with actresses, but both also appeared and disappeared without causing comment.  Real life Louis’s and fictional Percy’s lives depended on being masters of disguise.

In disguise, Percy fools his archenemy, Citizen Chauvelin, who Orczy gives the role of official French Ambassador to England.  It is an interesting example of her distortion of historical personalities and incidents for them to feature in her works of fiction.  In fact, it is doubtful that Bernard-Francois, marquis de Chauvelin ever assumed a false identity as he did in Orczy’s novel, The Scarlet Pimpernel, about Percy and his League of Gentlemen, among whom are such fictional but memorable characters such as Armand St Just, Marguerite’s brother, Sir Andrew Ffoulkes, Lord Hastings, and Lord Tony Dewhurst.

Throughout the history of publishing countless authors, who became famous and whose work is still enjoyed as books, films, plays and t.v. dramatizations, found it difficult to place their work.  Orczy’s most famous novel was no exception.  Percy took the leading role in her play called The Scarlet Pimpernel and captured the audience’s hearts. Subsequently the novel was published, and Percy became famous.  His fame increased with each sequel about his daring exploits.