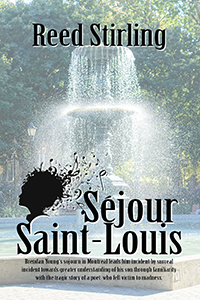 Today, a struggling father is driven to drink over the intransigence of his music-obsessed teenage son. An equally conflicted wife and mother threatens separation.

What connects these two worlds?

The Victorian fountain in Square Saint-Louis, a series of seemingly random incidents in the city, a bronze bust on a white plinth, and a school reunion where myth, art, and mysterious e-lixar fuse into dramatic reflections of family dynamics. Through mirroring, resolution proves possible.

“Stirling does it again, entertaining the reader with a parade of engrossing characters. Through a complexity of allusion simple truths are revealed. Contemporary, relevant, challenging, Séjour Saint-Louis is fused with ambiguity and subtle humour.” 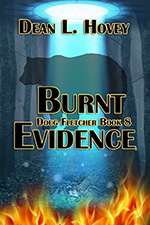 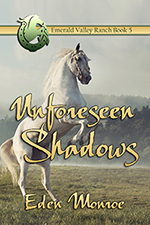 A 911 call cut off mid-scream and a melted cellphone in a circle of burned grass hint at an alien abduction in Effigy Mounds National Monument.


Kane Davidson continues to oversee his Emerald Valley Ranch with pride. A supreme alpha male in his prime, it feels good to hit his stride, his happiness now complete, despite unforeseen shadows….

A friend in need takes both Kane and Martin Parker to the edge, a dark time of forbidden indulgence and bitter consequence.

The grim reaper raises his ugly head. Will he be denied again?

Editorial Review
“Another Winner from novelist Eden Monroe. Settle in for a great read! Monroe just gets better and better.” Joan Hall Hovey, author of The Deepest Dark. 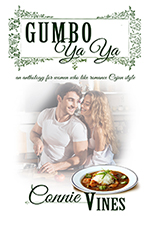 An Anthology of Romance - To Purchase https://bookswelove.net/vines-connie/

“Marrying off Murphy” – (Light-hearted Romance). Like all Cajun fairy tales, it began harmlessly enough. A match-making columnist promises to turn a stuffy professor into a charming prince.  So, why does this confirmed bachelorette suddenly wish she was dressed for the Ball?

“Love Potion #9” – (Contemporary Romance). Watch what happens when you mix a traditional Creole women with a fun-loving Cajun man and throw in a Voodoo Love Potion—stand back!  The Louisiana Bayou ain’t never gonna be the same!

“A Slice of Scandal” – (Mystery/Suspense). A producer finds herself embroiled in a mystery as hot as her Bayou Cooking Show.   When an undercover cop, turned chef shows up and dishes up more heat than a bottle of Louisiana hot peppers.  Can she prove her innocence before the real killer finds her?  Or, will she become the main-course in a murder trial?

“Pirate Ghost of Gombi Island” – (Time Travel).  After a violent storm dumps a Natchitoches historian on the deck of an 18th century pirate ship, she finds herself with an unexpected decision.  Should she jump and swim to her doom, or accept the pirate’s promise of a safe haven?

“1-800- FORTUNE” – (Paranormal). Garlic hangs for the rafters, but this sexy Loupe Garou isn’t looking for trouble, or a cure for what ails him. What’s a law-abiding werewolf to do when a gypsy woman shows up with mischief on her mind?  T.A.R.A. , 2nd place Winner, Paranormal Romance. 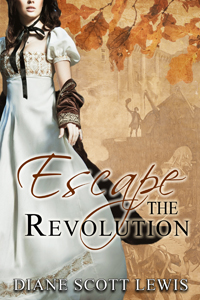 Forced from France by her devious guardian on the eve of the French Revolution, Countess Bettina Jonquiere must deliver an important package to further the royalist cause. In England, she discovers the package is full of blank papers, the address false and she’s penniless. Stranded in a Cornish village, Bettina toils in a bawdy tavern and falls in love with a man who may have murdered his unfaithful wife. Tracked by ruthless revolutionaries, she must uncover the truth about her father’s murder—and her lover’s guilt—while her life is threatened.

Historical Novels Reviews blog
“Diane Scott Lewis writes with a fresh, clear voice, keeping all the threads of betrayal, intrigue and lies from becoming tangled as she weaves them into her story”- The Muse

A love story steeped in secrets and set against the backdrop of the French Revolution, ... woven with the right amount of fact as well as fiction, each balancing the other in a perfect harmony. Diane Scott Lewis has the power of descriptive writing that makes readers feel as though they are traveling alongside Bettina as she faces the unknown. Simply brilliant. Historical Novel Society 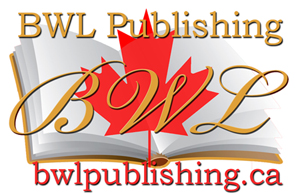