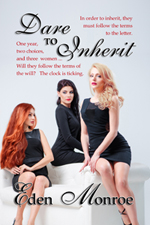 I can see it from here, the place where it all began, and I’d love it if you’d come with me on this small step back in time. Destination? My very first novel, Dare to Inherit. No really, it’ll be fun. There are even cats involved, on a minor level.

Before we set off let me very briefly explain how the idea was hatched for this novel in the first place. I’d taken a distance ed course in creative writing, and for the second part of those studies I could either compile a selection of short stories, or create a novel. I chose to do the latter and was excited to get started. I knew the story I wanted to tell, but as is so often the case, it’s getting started that sometimes presents the greatest challenge. It’s like the first step on a thousand-mile journey because that’s what the distance will feel like by the time you’ve finished. Words, ideas, plots, bouncing around in your head like demented grasshoppers in a ripe cornfield, and it doesn’t relax until you organize your plan of attack and start moving in the right direction. If not the corn will be gone, and so will your ideas, lost in the mists of time.

So where to start? At the beginning, with that first sentence, because there are plenty more right behind that one, anxious to be recorded, and so off I went

And now for the where this novel actually began. We won’t be going far, just up to the haymow. Say what!

Ahhh, I remember it well, it was a late September day, sunny but refreshingly cool, a most welcome relief from the baking heat of a country August; a day of coral, crimson and honey-gold trees set aflame against a cloudless sapphire sky. It was a day filled with exciting possibilities and promise; ideas inspired by a glorious autumn in full bloom. It was a great day to write.

As the vagaries of imagination go, I chose a most unusual but inviting retreat to start my novel. That’s right, the hushed sanctuary of a haymow, ripe with sweet smelling summer hay. Equipped with my faded black camp chair, notebook and pen, I was all set. But I wasn’t alone, because besides one very persistent house/barn fly that kept everything real, spring kittens, now gangly patchwork teenagers, taking a break from mock-battle cavorting, watched warily with their parents from atop nearby bales, ready for flight in a nanosecond.

None of them came near, that privilege was reserved only for mealtimes, but they rarely looked away from the woman held captive in their gaze; the intruder in their midst. A novelist!  In their haymow! Eventually they became bored, tucked limbs and napped, periodically peering suspiciously through fuzzy eye slits to make sure I hadn’t decided to come any closer while they dozed. I hadn’t, because one sudden move and they’d scatter like crows, the camaraderie of the moment lost.

While they slept, I swatted ineffectually at the fly but no matter, I had started down a thrilling new path, armed with the exhilarating notion that I could one day become a published novelist as I continued to let my imagination play outside of the box. The novelist within had been set free in a tsunami of creative flow as my hand raced over each page trying to keep pace with what I could imagine, enjoying the rush of being swallowed up in the fascinating world storytelling. 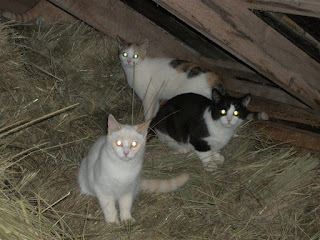 That haymow chapter would eventually become a full-length manuscript honed to a much more streamlined product, revisited, refined and lovingly enlarged upon to complete my course and over time, become Dare to Inherit, my debut novel released by Books We Love. It was a wonderful experience when it made that all-important leap from the proverbial hatbox where it landed after the course, to a published book.

Finally, the sisters: Jocelyn, Chloe and Willow, were set in motion for real, facing off against their newly deceased adversary, Aunt Feenia, who, despite her untimely demise, still means business. But she can’t hurt them anymore … or can she?