R.I.P.
James Otis, Jr. (1725-1783)
…Blow to head “unhinged his reason” (in 1769)
…”got in a mad freak”
…killed by bolt of lightning
Poor James encountered a number of difficulties even before he met with a tragic end, according to his tombstone at the Granary Burial Grounds in Boston, MA.

However, he managed to live longer than Thomas Webb, who “died very suddenly, much lamented, on 8th July 1769 – aged 33 years”.

In one small section of the cemetery you find James and Thomas, along with others on whose tombstones are carved weighted words:
“Sacred to the memory of…”
“Here lies buried the body of…”
“Here lies deposited the remains of…”
Tombstones from the past tend to give us more history of the person than more modern ones, which often only have a name along with birth, death and possibly marriage.  I like to visit cemeteries in my travels. They are peaceful paths through a city’s history. Sometimes there are keys to what happened to the people but often we are only reminded of the finality of death.
John MCluer esqr, who departed this life May 21, 1785, aged 40 years.
“In the cold mansion of the silent tomb,
How still the solitude, how deep the gloom.”

That doesn’t mean the messages on tombstones aren’t sometimes irreverent and we should take them with a bit of humor. Apparently not everyone in Dodge City liked McGill’s pastime, as this wooden marker in Boot Hill Cemetery implies. (“A buffalo hunter named McGill who amused himself by shooting into every house he passed. He won’t pass this way again. Died March, 1873.”) You have to wonder if one of the town residents didn’t “help” McGill find his final resting place.

Original markers at the Granary Burial Grounds were slate and fairly similar in structure. I found quite a difference at the cemetery in Paris, where there was everything from flat individual markers to family mausoleums, some quite ornate. 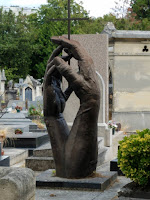 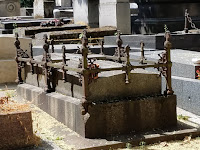 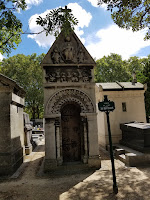 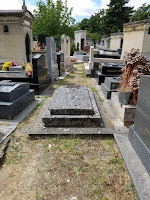 You have to wonder what they were thinking with this one, right in the middle of the lane, which wasn’t very wide or exactly straight.

Many people die as they lived, with humor and a touch of sarcasm. Some simply want to have the last word. When I decided to write about tombstones, an article happened to pop up on my Facebook page with humorous sayings people actually put on their markers. https://www.daily-choices.com/the-funniest-headstones-you-will-ever-see-part2/17?xcmg=1 is the link.

My visits to cemeteries wouldn’t be complete without a picture of standing stones we found in Scotland. This group was very small and out on a country road. There were no markers or information; we had found it from a tourist map, back before Google GPS. Is it a religious ceremonial site, directional markers for long ago travelers, or a burial site?

Writers and cemeteries appear to be equal targets for columnists and cartoonists! 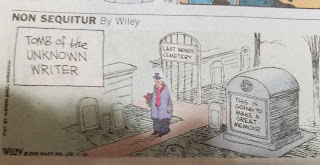 “Live your life so your children will say you stood for something wonderful.” – on the headstone of a woman close to me who truly did make the world a better place for all who knew her.

– When once asked why I write, I said, among other things, that I wanted to leave my name on something other than a tombstone. I have been fortunate to be able to do that.