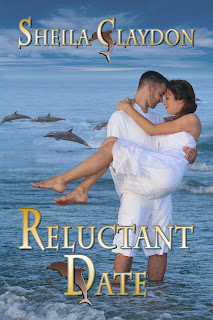 I live in a small coastal town in NorthWest England. It lies on the eastern shore of the Irish Sea where it is fronted by 20 miles of a wild and scientifically important beach whose main characteristic is a dune landscape that is continually transformed by the sun, the rain and the wind.  This is important because the movement of the sand dunes is what creates a habitat for local rare species such as the natterjack toad, the northern dune tiger beetle and the sand lizard, all of which need to be protected if they are to thrive.

I used this, although in far less detail and far more romantically, as a backdrop for part of my book Reluctant Date, because, if you live here,  as well as the rare fauna you soon learn that dune heath is one of the rarest wild habitats in the UK. It is formed by the lime in seashells being washed out by rain over hundreds of years until the sand becomes acidic enough for dune heath heather to grow. Once I had briefly mentioned the importance of the dunes (it really was relevant to the hero of the book!) the rest of the story was set on the gulf coast in Florida. Then I moved onto another book and forgot about it...until recently!

Although I was born in the south of England, I have lived here for 31 years! Longer than I've lived anywhere. And yet I still thought of myself as a 'blow in', which is the local term for anyone from outside the area. Because of this, although I love living here, I've never taken much notice of the local history, preferring instead to delve into genealogy to discover everything I could about my family while ignoring the living history all around me.

Very recently, however, this has changed. In a previous post I wrote about knocking on doors for a petition to resolve parking problems, and how by doing this I met  people who were born and bred here, and whose stories so intrigued me that I wanted to discover more. So I've been looking and I've discovered there is more to those moving sand dunes than a habitat for wildlife. Over thousands of years the wind blown sand has hidden buildings, damaged crops and destroyed whole communities. Then, in the fickle way of nature, storms have suddenly exposed old land surfaces.

So many things have been discovered about the history of the town and its surrounding area that I could keep blogging about it for months, but by far the most exciting is what has been discovered on the shore itself. Trails of human footprints and the tracks of mammals and birds were imprinted in the hard baked silts deposited as sea levels rose and fell at the end of the last Ice Age. These can be seen at low tide where they clearly show large numbers of wading birds such as the oystercatcher and the crane. There are even some overlapping circular tracks that indicate a courting ritual being enacted. Then there are the tracks of roe deer, red deer, wild boar, unshod ponies, wolves and domestic dogs and, most exciting of all, auroch tracks. Precursors of cattle, it is thought that these huge animals were hunted to extinction during the Bronze Age. All we have left nowadays on the beach and in the surrounding fields are oystercatchers and a very few roe deer plus many, many domestic dogs!

The human footprint trails are even more fascinating because the researchers who spent hours studying them and taking plaster casts have been able to build a complete picture of life here thousands of years ago. They can tell which are male or female footprints from the stride and the shape of the foot, and from this they have extrapolated the height and even the age of these long ago humans. Apparently while the men averaged 5ft 4 inches the women were only about 4ft 7 inches. As their female counterparts in Scandinavia were 5ft, and the early settlers are known to have migrated here from Norway and Denmark, the researchers deduced the the female footprints indicating shorter women are in fact those of young teenagers and children, not adult females, and that they would have been gathering shrimps, razor clams and other sea food from the reed beds bordering the lagoons and creeks. The male footprints trails, which are often deeper, appear to be tracking the red and roe deer, however, as the deeper footprints indicate an increase of speed as they hunted wild animals for food.

The overall impression from the footprints, including several showing deformities such as missing toes, is of family groups searching for food along the prehistoric shore. Best of all though, is a site showing a turmoil of tiny sun-hardened footprints, evoking the image of a small group of carefree children mud-larking one baking hot summer day five thousand years ago.

I am, of course, hooked now. And there is a lot more to discover. Maybe one day some of it will feature in one of my books. In the meantime I'll visit those footprints often and try to imagine what life would have been like living here so many thousands of years ago.