Mornings at My House, by Karla Stover 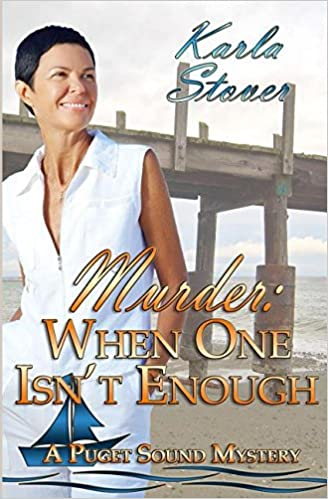 Henry Thoreau referred to mornings as "a cheerful invitation" and I totally agree. I like to wake up at dawn and watch the trees outside our bedroom window. When we first moved into unincorporated Pierce County we lived in the country. One morning a herd of horses ran by the window. One neighbor had goats and another a pear tree with pears that were pink inside. There used to be a big wetland at the end of the street and with the window above my head open I could hear the spring peppers. Sadly, the wetland was almost completely built on and what is left has no peepers. The horses, goats and pear tree have been replaced by houses.

After dawn has done its due-diligence, we get up, get dressed, and turn on the news. When the dog goes outside, our peanut butter trees, 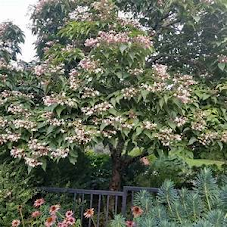 which are in full bloom, fill the yard with a wonderful jasmine-like smell. But the cats, Sally and Marley waste no time in telling us they're hungry. Then it's a challenge to find a food they don't turn their noses up at. My husband also checks the front porch because sometimes the neighborhood stray wants fed, too. My husband also wants breakfast (I'm a brunch eater) and eats while I wash the previous night's pop corn bowls, (I cut out after dinner sweets and my husband lost two pant sizes) check my emails and take a look at the headlines on BING. Last week I saw a funny misplaced modifier but when I went back to look for it, it was gone. Here's one from the Seattle Times: "“Microsoft, which has used its solid, boldfaced, italicized logo since 1987, is expected to unveil its new, more colorful logo Thursday at the Boston opening of the 23rd Microsoft store.”  It was actually the 23rd store in Boston. But I have to look at headlines because the local news is mostly, traffic, weather and covid. And now it's time for our walk. A lot of the land between Tacoma and the next town east of us (Puyallup, pronounced Pew all up) is undeveloped and we liked to walk in the woods on a ridge above the creek. On the way down, though, I get a 98ct. coffee with three creams from McDonalds. 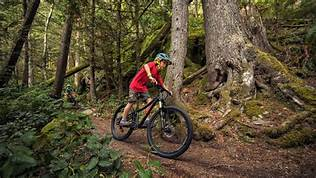 When our walk is over and if we have no errands, we're home by 10:30. That rarely happens. Errands include but are not limited to: picking up a prescription, buying some groceries, stopping at the library, giving blood. Five years ago my brother had surgery and needed somewhere between seven and nine units of blood. I decided I'd replace the units so they'd be available for someone else. I took iron and vitamin supplements for a year before I could donate and now I'm about three units away from fulfilling the promise. Last week I was approached by a man asking for money. I asked if he was hungry and he said, "Oh, yes." So we went into the nearest AM / PM and I let him pick out what he wanted--chicken and a Pepsi. As a 'thank you' both our cars ended up in two different shops, the front door lock broke, and our washing machine out. Fate does indeed have a cruel sense of humor.

Once home, it's time for chores and in the afternoon I finally have time to work on my next book. The pandemic shut downs were never a problem for us. It's not an exciting life but we like it.