So what to write next—Tricia McGill

People ask me where do my ideas come from, and where do you begin—simple answer to the second part of course, is at the beginning. As for the ideas, well, all over the place, often from dreams or a small incident that happens. As I write across Romance sub-genres, I usually do not have trouble deciding what book to start on next. The choice has proved rather more difficult than usual. Blame it on Covid, the current upside down state of our world, or just my own current state of lassitude.

Anyhow, it is now time to buckle up (or is that down) and get on with working instead of procrastinating. As my preferences are Time-Travel and Historical, it took me precisely five minutes of careful research on the internet before settling on another Historical Romance. Next step was to decide where to set this book and in what period to set it. This also came easy for me as quite a few of my contemporary romances are set in my favourite state of Victoria, and some of my historicals set in my home city of Melbourne. I happen to love research and so it is no hardship for me to delve into a certain period or place as setting. It took me another few minutes to decide on the background story. Now I will just go away and chat with my Muse who will introduce me to my main characters, this being for me the most important part of the entire process.

Okay, I am back from my lunch and only partially closer to knowing my protagonists. I usually know my characters quite well before I start and they nag me until I get their story going. I have the period more or less set around the 1850s. Melbourne was declared a city in 1847, but I want to go outside the city and head north.

Aha, the Victorian Gold Rush started around the 1850s and then there was what became known here as The Eureka Stockade, which in fact was a battle that lasted all of 20 minutes on 3rd December 1854. That sounds to be a good place to start any story. In the event that you know absolutely nothing about this event—on 30th November that year, miners from the Victorian town of Ballarat, so disgruntled by the way the colonial government administered the goldfields, swore allegiance to the Southern Cross flag at a place called Bakery Hill. They built a stockade at the Eureka Diggings. Government troops attacked the stockade, and in the ensuing battle at least 22 miners died plus six soldiers. 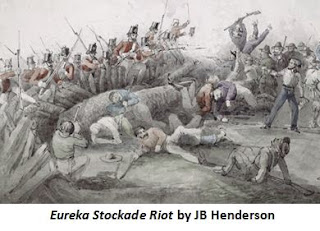 This rebellion was the idea of one Peter Lalor who asked men to take the oath to be faithful to The Southern Cross and to stand true to each other in the fight to defend their rights and liberties. Sound familiar? The rebellion proved to be a key event in the development of Australia’s representational structures and attitudes towards democracy.

What if my hero turned out to be the son (or near relative) of one of the miners who died? How would he behave in the aftermath of the rebellion? In fact, he could have been a mere lad when the battle took place. The heroine perhaps is the daughter of one of the owners (a widow) of a lodging house that had been built to house the miners as they flocked into the area. Could the couple have become known to each other when they were teenagers?

So, there you see, in the space of an hour or so I already have the characters in my head, know more or less where they lived and about what time my story will begin. Next task is to name them and learn the characteristics that set them apart from those around them.