Connecting with a reader 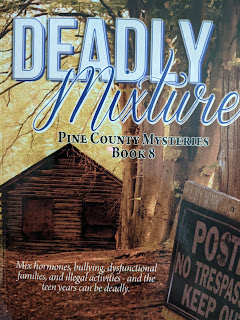 In "Deadly Mixture", the spouse of a character is presented with a breast cancer diagnosis. I'd hoped it would balance the somewhat dark plot, with the reality and compassion of the medical situation. I spent A LOT of time researching the breast cancer diagnostic process, treatment, and the psychology of the patient and her family. After the book went into print, I mentally set aside that subplot and the work that went into creating it.

Until a book signing last week.

After discussing the writing process and offering a preview of the follow-up Pine County mystery "Fatal Business", I asked if the attendees had any comments or questions. A gentleman I recognized from a previous talk raised his hand. He'd enjoyed "Deadly Mixture" and wondered if I realized how close to reality the breast cancer subplot was. Before I could answer, he added that his daughter had been diagnosed with breast cancer shortly before "Deadly Mixture" was released. After reading it, he passed his copy of the book to her, hoping she'd enjoy the story.

With tears in his eyes, he went on, explaining that his daughter breezed through the book, then called him. "Dad, who wrote this book? Do you realize how exactly the author described the pain of the diagnosis, the cycle of surprise, denial, dread, and fear I am going through?"

I know the reader thanked me for my genuine representation of the character's experience with breast cancer, and her psychological response to the diagnosis and treatment. Beyond that, I was left speechless by the depth and sincerity of his comments. I hope I provided adequate thanks for his comments and praise, but to be honest, I was somewhat in shock and don't remember how I responded.

In the days following the book event, I reflected on the man's comments. What had inspired me to include the breast cancer subplot? Obviously, the hours I spent researching the details of the medical treatment and psychology were well spent. But what inspired me to delve into it?

A woman approached me after a different book event sponsored by a local church. She'd read all my books, across all three series, and told me that God must be inspiring me. I believe my response was flippant, joking that I was reasonably certain that God didn't care what happened to my fictional Jill and Doug Fletcher characters.

Now I wonder why I'm drawn from my bed with the characters swirling in my brain, screaming at me to get onto the computer and capture their words before they're lost. Why spend the effort and time to research an obscure plot twist to make sure it's absolutely correct?

Perhaps the answer is in the words of that reader's comments about "Deadly Mixture". I/we do it because our words have meaning. They're fiction, but there are times when we touch our readers. Sometimes we hope to make them laugh. Other times our words bring tears. Either way, it's become
a humbling responsibility.