Where Do Writing Ideas Come From--Especially for a Circus Romance?

Readers ask me where I get ideas for stories.  Ideas come from everywhere, and often at times when I least expect them--from   newspaper and magazine articles, dreams, personal experiences, books, and movies--and so forth.  Yet from that germ of an idea my characters have sprung to life, fought their “dragons,” and won the battle!

Okay, now for an example.  One day back when I first started writing, I read a magazine article about a circus family who performed as trapeze artists.  The son who’d been interviewed for the article said he was always careful not to make friends with teens “on the outside” because soon the circus would move on and he might never see that friend again. What a perfect conflict between an everyday teen gal and a guy who is committed to travel and perform with the circus! I decided. I told my critique group, “I think I can do this!” So I started researching the realities of circus life, trapeze artists, and circus veterinary medicine. Then I began writing and rewriting.  Several months later Merry Christmas, Marcie was born.  Imagine my surprise when I received a phone call from Silhouette’s YA editor only three days after I’d submitted the manuscript.  I nearly jumped for joy when she offered me a contract!


After Merry Christmas, Marcie was published, a spin-off evolved--Summer Magic.  Now an older Marcie has emerged (I changed her name to Lisa), plus the central conflict has taken on on a slightly different twist.  Lisa, now a certified veterinarian assistant, accepts a job to work for the circus vet whom we met in the first story.  Although she realizes the earlier assistants had lasted only a short time because the vet was so difficult to please, Lisa is willing to take on the challenge.  She needs money to pay off medical bills following a serious snowboarding accident.  Soon, however, Lisa questions her ability to pass her probation, especially as one calamity with the circus animals follows another.  Even Michael, the dashing trapeze artist whom she’s strongly attracted to, expresses his doubts, which disheartens her further.  Still worse, Michael will not follow her if she leaves.  Recently, he’d given up circus life to work on "the outside" and was totally miserable.  He knew he had to get back to the circus, no matter what.  Again a barrier looms between Lisa and Michael:  she, the “townie” who will always most likely end up on the outside again, and he, the devoted circus performer who will always stay. 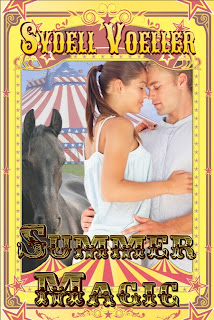 When her fiance calls off their engagement, veterinarian assistant Lisa Prentice joins the circus in hopes of escaping the everyday grind. But life under the big top isn't quite what she expected. None of the veterinarian's former assistants managed to please their short-tempered boss, and Lisa fears that her days are numbered, too. Michael Figaro, a dashing young trapeze artist, is also caution about whether Lisa can stay, and because of that, he tries to keep his distance. Still, Lisa finds herself overwhelmingly attracted to him. Although Michael is the aerialist, it is Lisa who is flying on an emotional high wire. What happened to her safety net? Will their love survive?

Reviews for SUMMER MAGIC
"This breezy romance follows Lisa Prentice, a veterinarian assistant, as she begins her new job traveling with the Jessell and Stern Circus. She is interested in continuing the care of an Arabian horse named Ebony that she helped to save while the circus was on a layover in New York. Of course, she has other reasons for "running away with the circus". Her fiance', a prominent lawyer, has recently dumped her for another attorney. Lisa wants to heal by concentrating on her career. Enter Michael Figaro, the star aerialist with the circus and the son of the circus owner. Immediately, there are sparks between the two. However, Michael also has a jealous twin, a trapeze artist named Claudette, and Rita, the pretty aerialist who would like his attention. When Claudette begins to fall in the ring, Michael begins to spend more time with Rita, training her for Claudette's position. Will romance blossom between the two, or will his love for Lisa prevail?

This book is an example of the perfect romance. I enjoyed Ms. Voeller's ability to switch between the point of views of Lisa and Michael. I felt I knew all the characters very well. There were a few side plots beyond Lisa and Michael's romance, and I found that they only enhanced the feeling of the story. This is a great story to read in one sitting and spend a few hours swept away in the magic of the circus." Bethany Payne, Round Table Reviews