Eat Humble Pie and be Merry! 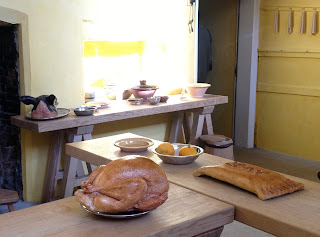 Have you ever wondered how our ancestors in Elizabethan times spent their Christmas. If you have, then wonder no more. Eat, drink and be merry was their attitude towards Christmas. After the miserable years of Mary Tudor's reign, Elizabeth's love of culture and luxury was very welcome, and when she indulged in Christmas festivities so too did the rest of her subjects. Not everything was equal though. While the nobility enjoyed brawn and mustard, roast beef, goose and turkey, all accompanied by plum porridge, minced pies and a special Christmas beer, their servants ate Humble Pie.

While the grandest homes boasted peacocks and roasted swans in full plumage as a centrepiece for the table, their servants were boiling up discarded offal. That was after they had skinned the birds prior to roasting and then slipped them back into their feathers before serving. A spit roasted wild boar, complete with head, was another spectacular centrepiece.

The meal would also have been accompanied by tomatoes, potatoes, red peppers and pineapples as well as citrus fruit, quinces, melons and apricots: exotic foods that had been brought back from the New World and from Southern Europe. And as if that wasn't enough there were colourful sweetmeats including marchpane (marzipan), gingerbread and candied fruits as well as custards and tarts. Everything was washed down with mulled wine, syllabub or lambswool (a blend of hot cider, sherry or ale, spices and apples and heated until it had a white woolly head).

Servants, however, had to make do with ale and the aforementioned Humble Pie. This really is a pie, not just an attitude! It was made from the innards of a deer: the kidneys, intestines, brains, heart, or liver (the humbles), which were boiled in a stew along with suet, apples and currants and seasoned with salt, sugar and spices before being encased with pastry. So if you want a real Elizabethan Christmas, try the recipe below. On the other hand, you may prefer the peacock and the swan!

This ancient recipe is from the historic Castle Howard in Yorkshire, England (http://www.castlehoward.co.uk) and was written down in 1734. It is the inspiration for the saying ‘to eat humble pie’ as only the peasants ate this pie, the better meat being saved for the wealthy . The wording and spellings are more or less as they were first written down.

How to make it

Parboil the Humbles of a Deer
Take all the Fat off them
Add the Beef Suet and mince it very small together
Season it with Cloves,Mace ,Nutmeg, and a little Cinammon and Salt
Put some Currants, Candy's and Dates, stoned and sliced
Fill your Pye and lid it
When baked put in some Sack and serve it (sack is fortified wine)
Posted by Sheila Claydon at December 23, 2012 1 comment:

Contest Update from Books We Love

Click here for the latest contest news and subscribe to our monthly, no chat or spam newsletter: http://bookswelove.net/contest.php

Email ThisBlogThis!Share to TwitterShare to FacebookShare to Pinterest
Labels: contests

On the Casting Couch with Gail Roughton 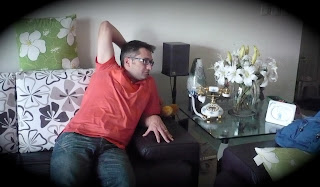 Over the next few months a number of writers have agreed to sit on my Casting Couch to discuss the different methods  they use in their search for the characters who populate their books. Their techniques give a fascinating insight into the writing process and the writers themselves

Today author Gail Roughton joins us on the Casting Couch to share the tricks of her trade and to tempt us with the wonderful Chad Garett from her War-n-Wit Inc. series.

Thank you for agreeing to sit on the Casting Couch Gail. It's always a treat to talk to a multi-published author and discover how she casts her characters. Assuming that you are sitting comfortably, let's begin.

* * *
Which characters are the hardest for you to develop? Is it the hero, the heroine, the villain, or the secondary characters?

You know, to be totally honest, I don’t think I’ve ever had a harder time with one than the other.  For me, everything just kind of – radiates – out in a circle from each other as the story develops.

You’re making me think about how I write!  Honestly?  I’ve done it both ways.  Sometimes the plot itself just takes off on its own and produces the characters that plot needs.  And sometimes a character (or two or three of them) stand up in my mind and start walking and talking.  And I think for me that’s the trigger.  The signal.  When the characters start walking and talking and I’m just sitting back and watching them, like I’m watching a movie, well, that’s when it’s time to start writing. (Other than in my head, I mean.)

Can you give an example from a published story?

Well, let’s see.  I think for the War-N-Wit series, the plot and the characters came together.  I really can’t separate the development of one from the other.  In Miami Days & Truscan (K)nights, the plot came first and dictated the characters I needed. I think the plot came first for Down Home, too, and the plot formed the characters.  Because both of those novels have very specific worlds/regions.  Now, the Dark series? (The Color of Seven and The Color of Dusk)  That might be my most character driven work. And while I vaguely recall (first draft of that was in 1993 and that was a long time ago) that though in fact, I envisioned the hero first, it wasn’t long at all until the villain of that novel, Cain, made his presence known.  And I’ve never had a character quite like him.  He – took charge.  I could see him, I could hear him, he was just – alive.  And oddly enough,  he himself dictated the birth of two secondary characters that I absolutely love, Tamara and Sadie.  They had to be what they were – because of what he was.

When deciding how your characters should look, do pictures inspire you or do you think of someone you know? Or perhaps you just rely on an active imagination or another method entirely.

I think primarily I just see them in my mind.  They – formulate.  After they’re “formed”, I’m sometimes startled to realize when watching TV or a movie that a particular actor or actress looks just like them.  Sometimes that’s probably because I’ve subconsciously formed them with that actor in mind, but I know sometimes it’s not, because it’ll be an actor or actress I’ve never seen before or who’s not well-known .  Of all my characters, there’s only one that I actually envisioned based on an actor I was familiar with.  And that’s Cain.  This is really dating myself, but in the 1980’s, they did a television series of the wonderful Spenser novels by Robert Parker called Spenser:  For Hire.  Robert Urich played Spenser.  An actor named Avery Brooks played Spenser’s side-kick Hawk.  And he did it superbly.  Fabulously.  I’d read the books and Avery Brooks didn’t play Hawk, he was Hawk. And from the minute Cain entered my world, he was Avery Brooks.

Do you have a system for developing their character traits? I know some people use Tarot or Astrology. Others produce detailed life histories. There are also writers who allow their characters to develop as they write. What's your method?

I honestly don’t have any method other than waiting till they walk and talk on their own and then sitting back and watching them do it.  They develop themselves for me.  I don’t develop them at all.

All characters have goals. Can your character’s goals usually be summed up in a word or two, or are they multi-layered? Do they change as you write the book? Could you give some examples?

Multi-layered.  To me, they’re real people.  And real people are multi-layered.  And yes, they absolutely change as I write the book.  Some of them, anyway.  Some of them don’t, they behave themselves.  But some of them have pulled some real numbers on me.  And some didn’t actually surprise me at how they turned out because I didn’t have a clue whether they were going to be good guys or bad guys, I just waited to find out.

Motives drive a character. How do you discover your character’s specific goals? Are they based on back story or do other elements influence their motives?

I don’t discover anything about my characters.  They tell me.  All I’m doing is telling a story.  A story that’s formulated itself to the extent that it’s a movie playing in my head, and I’m just sitting there watching it unfold.  Transcribing what they’re saying.  Narrating the action.

And last but not least, do you like your characters? Are they people you would want to spend time with? Assuming they are not just a paper exercise, which of your characters would you most like to meet, and why?

I love my characters.  Even the ones I hate.  And of course they’re people I want to spend time with.  Otherwise, they wouldn’t be there, ‘cause I wouldn’t have spent the time to let them create themselves.  And the character I’d like most to meet is Chad Garrett of the War-N-Wit, Inc. series.  Why?  Because he’s Magic Man.  And we all need a little magic in our lives.  Because he’s totally tough and totally a man in love with his soul mate.  Because he’ll take the bad boys out in a heartbeat (even though he’s a bit of a bad boy himself sometimes) to protect an innocent.  Because he knows exactly who and what he is and doesn’t want or need to be anything else.  The only thing he needs is Ariel, his soul mate.

Chad Garrett sounds like someone we would all love to meet Gail. I think I'll go searching for him right now. Thank you so much for visiting my casting couch and talking about the characters in your books.

Gail is a multi-published author and her credits include the paranormal romantic suspense series, War-N-Wit, Inc. and a dark romance/horror series, appropriately titled Dark. She still maintains she couldn’t have this much fun for free doing anything else.

You can find out more about Gail and her books at http://gailroughton.blogspot.com or at http://bookswelove.net/r
Posted by Sheila Claydon at December 03, 2012 3 comments: