The first house I remember well was on Cemetery Street. The high windows of our little 1850’s brick house had a view of the historic local cemetery, complete with the sunken stones of the early settlers and poor folks, as well as Victorian obelisks and rich-family crypts. It was all sheltered by a fine stand of tall hardwoods—maples, beech, sycamore, Kentucky bean trees, and oaks. I often stood up on the couch and peered out the window across the street to see a funeral in progress, the black cars, the black dresses, hats and sad, slumped demeanor of the mourners.  At certain times of year, people arrived and filled the place with flowers—Memorial Day, particularly. We often walked there, Mother and I, with whatever dog we had, sharing the peace with our silent underground neighbors. 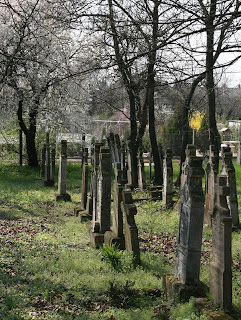 Always having an active imagination, I drew many pictures of the cemetery, my notions about  the underground life of the dead, so thickly tucked away just across the street. My parents, of course, found that a little odd, but it seemed perfectly straightforward to me. All those husbands and wives that I’d seen, their gravestones sitting side by side, I figured, were still there, only now confined to a spot beneath the ground. I always drew little rooms, with tables with decorative flowers on top, and sofas and chairs, a picture on the wall and, sometimes, even a pet. I thought it must be a little lonely and boring for them to never be able to go outside anymore, to be staying forever in that underground haven, which was all I could make out of the much talked about “heaven.”  It made perfect sense, when I first heard about ghosts, that the dead might wish to come out and walk around in the cemetery. I spent a lot of night times looking out the front window around twilight, hoping to see one. After all, I took walks there, under those aged trees, listening to the birds and breezes, and it was always pleasant. 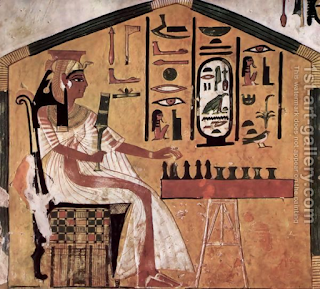 (Here's an Egyptian queen enjoying her own little room inside the pyramid, playing Backgammon for eternity.)


For the early part of my childhood, I lived in that rural Ohio town, with a close-knit family around, which made all holidays great fun, but Halloween was special in its own way. My younger cousin, Mike, and I were often dressed to compliment each other—one year we were cowboy and cowgirl, on another we were Raggedy Ann & Raggedy Andy. Once we were Spanish dancers, complete with hats with bobbles dangling beneath the brims. My cousin, now a big time politician, had in childhood a pronounced lisp. I remember him carefully explaining to someone who’d asked that we were “’Panish-tan-sers.”  Our costumes were hand-made by grandmas and loving aunts and we showed them off at what seemed to us an exciting costume parade for children which was held annually at the high school. 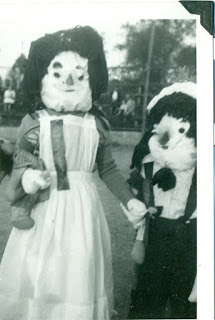 I also remember one night of trick-or-treating with some older children who lived up the road, away from the cemetery. They were the kind who weren’t entirely to be trusted with a smaller kid who wasn’t a family member.  That night's costume had been spur of the moment, so my mother had turned me into a ghost in an old sheet with a pillow case head. The head, as we ran door-to-door in the darkness, kept slipping, so I couldn’t see.  I was gamely trying to keep up with their longer legs in the darkness, but they only laughed and ran ahead. I remember falling and rolling head-over-heels down the steep grade next to the last house on the block, splintering the warm popcorn ball I’d just been given. Then I had to untangle myself from the sheet. After I escaped from that, though, I was surrounded by night. The  only porch light seemed about a mile away.  It was so scary to be left alone in the darkness that I abandoned my goodies and ran home as fast as I could. 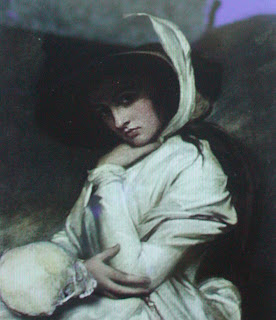 SEE ALL MY HISTORICAL NOVELS: