The age old question. Is it the chicken or the egg, or the other way round?

But my query is, what comes first, the characters or the story? This is a question as a writer I am often asked. I always thought it was my characters as I believe my stories are character driven, but looking back I realize this isn’t wholly true.

Taking my books one by one. Let’s start with Remnants of Dreams.

This one was easy as the original idea was to tell my mother’s story. I was last to arrive into our large clan so my early years were filled with stories, related mostly by my eldest sister, of life through the difficult years before and during WW11. Alicia, the main character of course is based loosely on our mum. The last time I can recall her actually cuddling me was when I was really young, perhaps 4 of 5, so this tells you a lot about her character. Cherished by all her 5 boys and 5 girls, she was nonetheless not a woman to shower us with affection. But, she was always there for us and I cannot remember a time when there was not a meal waiting for me when I came home, when the fire was not already blazing in the fireplace when I rose on winter mornings when there was ice on the outside of the windows. Never was a woman so liked by her neighbors and those who knew her. My one regret is that she never talked about her early life or days before she met and fell in love with our father. There was a period when my sister and I even surmised that perhaps they never even got married as we had no tangible proof of a wedding. But we have this picture, which we presumed could have been taken on their wedding day in 1914. 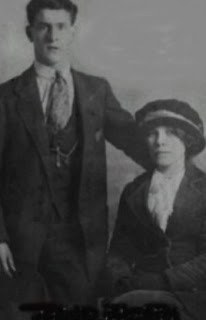 But I have gone totally off the subject. It was easy to create Alicia. Mathew, her husband, was a figment of my imagination. Based loosely on my father, in that he worked for the gas company and was gentle, kind, and a loving husband, he differed in lots of other ways. There were so many other characters in this book, some bearing similar characters to members of my large family, but mostly created to suit the story line. That proves therefore that the story came first and then the characters—or does it? I’ll leave that one for you to sort out.

Now Mystic Mountains was definitely story first characters second. I attended a creative writing class years ago when I had barely written one or two full length novels that had probably reached draft number two stage and the tutor at this class gave us a task to create an opening scene that featured a character arriving in Australia in the 1800s after being transported from Merrie England. That one scene turned into one of my most popular books. Bella was the girl transported for a misdemeanor against a man of the aristocracy, so it followed that Tiger would be the arrogant Englishman she detested at first sight who would become her allocated Master.

Distant Mountains was a follow on. It was supposed to be the story of Bella and Tiger’s eldest son, but somehow Bella’s newly transported brother took over and so it became his story. It follows that his love interest just had to be a woman of quality whose father was a bigot who would never agree to his only daughter marrying, or even socializing with a convict.

I’ve always loved Time-Travels so thought it about time I attempted to write one. Mine was destined to have a twist as I sent a couple, Andrew and Liz, who had totally opposing personalities back in time to meet The Laird. This Laird bore a striking resemblance to Andrew and so Liz half fell in love with him. Now in this book the story most definitely came first and the characters formed in my mind once the story line was set in motion.

Travis, the Laird’s story, followed. It just had to as I was also half in love with the Laird, and could not just leave him there in the past without finding out how things panned out for him. But when Liz’s friend Beth ended up back in his time Travis was a changed man from the rogue Andrew and Liz left behind. So, story came first as I had to get Beth back there somehow.

Now, Leah in Love (and trouble) still has me puzzled. I can’t for the life of me remember where this idea sprung from and can only attribute it to my Muse, who does tend at times to go her own way. Leah’s story is the only one I’ve told in first person, but once Leah had established herself in my psyche, what else was there to do but let her have her own way and tell us about herself and the trouble she gets in. Her real name is Violet and as that is a flower what was her occupation to be but a gardener, hence her eccentric aunt, who taught her all there was to know about flora, was born. Sean, her love interest just had to be a PI or how else would she have been involved in so much mayhem simply by working on his garden.

A Dream for Lani was characters first. This was another one my Muse took control of. I knew I wanted a shy, introverted woman who has lots of money but not much love in her life. Ryan and his children provide her with all the love she requires—after a shaky start of course.

Lonely Pride is set in Tasmania. I often holidayed in this magnificent state in my early days in Australia with my Tasmanian friend whose mother was one of those characters that once met you never forget. But, I digress. A few incidents that happened on one of my trips there formed the nucleus of this story. I guess I can say that story came before characters in this one.

Maddie and the Norseman is another of my Time-Travels. I was going through a Viking phase and absolutely knew I had to set my story back in Viking times, and specifically in the period after they had finished invading, ravaging and ransacking in Britain and were in the process of becoming honest tradesmen and traders. York was the obvious setting as it was one of the first towns settled by them. So, Maddie and her Viking Erik came after the plot line had been established. I do have another Viking story on its way some time soon.

So, there we are, I really haven’t proved anything. Sometimes it is simply an idea that appears in the first light of dawn and the characters have to then decide how they wish to fit into this plot we’ve decided on, and other times the characters rule and insist on going their own way. Whatever, you can bet we authors love letting our characters show us the way.