How fashion has changed—or has it? Tricia McGill

Fashion has played a large part in my life. Before my focus centered on writing I worked in the fashion industry for many years. My book A Heart in Conflict is set in the world of fashion and because of my past it was obvious that at least one of my books should feature the industry that was part of my life for so long.

It all began when I was a child. I guess it seemed inevitable that I turn to fashion as a trade as my mother was an expert seamstress and to be honest I can’t recall ever wearing a dress as a child that was not made by her or two of my eldest sisters who later took over the task. Joan was a pattern maker and also forelady of a clothing factory. It was she who more or less coerced me into fashion. I fought against it for a year after leaving school and argued that I did not wish to work in a factory. But a position in the cutting room where she worked became vacant and between her and my mother I was convinced to give it a try. Just as a side note, I wanted to work in stables or kennels. Ah,
that dream was never to reach fruition. My eldest sister was an expert embroiderer and so all my dresses from an early age were decorated with her wonderful smocking, a tradition that has more or less died out, as most of this type of work is now done by machines.

Joan would bring home fashion books and I spent many happy hours cutting out the ladies and lining them up for my impromptu fashion parades. My favorite of all time were the paper doll books. Not a birthday or Christmas went by when I was not given one of these books. I just loved changing the outfits to suit the occasion. On trying to find pictures to illustrate this I learned that the designs and dolls still exist but are certainly more elaborate than my early gifts. My sisters made me a rag doll and she got many a change of outfit, and hairstyle. Her hair was fashioned from thread wound around a book and stitched to her
head. 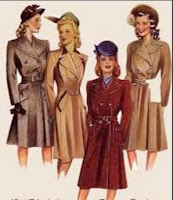 The color and length was changed regularly as the whim took me. How I wish I had kept that cherished childhood love, but like many childhood mementos she disappeared. Once we reach teenage there are too many other intrusions. I did keep my old china doll for years and only parted with her
a short time ago when she finally fell apart.  I have kept the dress she wore and her bootees, as both were made by my eldest sister for her first child.

I was so used to my sisters and mother making their own clothes that it didn’t seem unusual to me. Once I began in the cutting room, fabric became easily available so therefore I also made all my own clothes. For many years I didn’t possess a shop bought dress. I do have an admission to make here, for I cannot lie, I am not a good seamstress like my mother or sisters. Yes I can make a pattern from scratch and of course sew the garment up but I become impatient when it actually comes to the putting it together part. My mother had a Singer treadle machine, electric of course by now, a far cry from her early one that had to be hand driven. I learned to sew on that, and have never been without a sewing machine since I married and left home.

After my arrival in Australia I opened my own business for a while. Another sister came along with me as she is the expert sewer. It was fun while it lasted and some of the customers were dears who were always up for a chat while being fitted. I learnt many a family secret. Mind you, there were the hard to please women whose figures fluctuated with their tempers. There is nothing worse than having a bridal gown finished only to find that the bride has lost or put on weight suddenly, either through binge eating or fast dieting.

Aunt Flo (pictured) was also in the industry. This pic was taken circa 1040.

This was in the days before all the rules and regulations began to make life difficult for starting up a small business. I simply rented a shop, got my husband to decorate it, bought some fabric, and away I went. Until one day an officious looking man carrying a clip board came into the shop wondering if I had registered. Registered? Er, well no. But this was soon rectified as he was a gentleman and soon explained how to go about it. It was hard work in that little shop, and long hours, and so I returned to the factory. I loved my work, even though it was often tough going at change of season times when everything was always wanted yesterday.

They say what goes around comes around, this is so true in the world of fashion. I don’t mean haute couture which is at times bizarre in order to be different and outstanding. But as far as the average woman and what she is wearing today, my sister and I often nudge each other and say, “Remember that outfit I had that was just like the one this woman on the TV has on.”  Yes, we went through the maxi phase and the mini phase, the high boots and the strappy sandals and high wedge phase, the high-busted and the dropped waistline. Even the full skirt with layers and layers of stiff petticoats beneath, favored by swing dancers, was a trend we endured. The older ones among you will recall Alma Cogan who wore the really full skirt, and so we followed suit. I just Googled Alma and would you believe heard a snip from one of my all-time favorite songs by her, “Little things mean a lot.” Sorry, I digressed to shed a tear. Even my wedding dress was full-skirted, with yards and yards of tulle.

I think Bridal gowns have undergone the most changes. The bride of the 40s or 50s wouldn’t have

worn a strapless gown. Most brides had a long train and carried elaborate bouquets.
One thing that always disappointed me and my sisters was our parent’s lack of wedding photos. Our mother never talked about her wedding day, in 1914 or thereabouts, and it is likely they had a civil ceremony where she wore a suit that she would have made herself, like this one in the picture. She would have also made her hat.