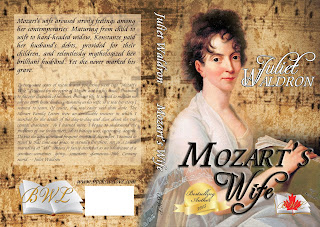 When I began Mozart's Wife, I was madly in love with the composer's music--which conflated to being in love with the man himself. His youthful music is so sensual, so bright and shiny, so full of optimism--it probably sounds like what the flowers must sing to lure the bees. it is green leaf and blue sky music--just the kind to accompany springtime and young love.

Mozart's Wife began like that, full of the romance that bloomed between Mozart and his Stanzi Marie. Pop songs from my own teen years filled my head while I wrote--songs which were likewise full of longing and desire, ones like "I think we're alone now" as the lovers seek a hiding place in which to express their body longings.

"Little sister don't you do what your big sister done" was the song in Mozart's head, I'm sure, for he'd first loved Stanzi Marie's big sister, Aloysia. This pretty, talented young woman instead  had given herself to an aristocrat who obtained for her the prima donna's roles she craved.

Mozart's height of popularity is on the horizon. He and Stanzi marry, overcoming his father's objections. He composes operas for the court theater and is welcome at the soirees of the rich and famous. Stanzi, hitherto her family's Cinderella, shares in this--she has clothes, maids, lovely apartments, parties--all the perks of having a successful husband.

Babies come, as they do. A "Blessed event" used to be the euphemism. In the 18th Century, however, childbirth was "travail," a danger through which women passed with trepidation. If she was both lucky and healthy, she might escape unscathed, but death in childbirth was a real hazard. (In my own experience, a gentle, kind family friend disappeared from my childhood when she died in hospital (1953) three days after an apparently uneventful childbirth.) Back in the 18th Century, which had no knowledge of hygiene or germ theory, midwives and doctors alike transmitted puerperal fever and other forms of sepsis from one new mother to another.

Mozart concealed his acute, feminine sensitivity within his music, only expressing these culturally forbidden aspects of his personality through the female characters in his operas. Although the plots toe the patriarchal line-- i.e., his opera, Cosi fan Tutte--So do they all--these weak women--he certainly endows his female characters with engaging, memorable personalities. There are heroic women, conventional women, mad women, love-sick women, as well as power-hungry, manipulative women, women of wit, of humor and admirable gumption.

Like his wickedest creation, the rake, Don Giovanni, Mozart knows and loves them all. Once I understood that about him, even the episodes where I conjecture infidelity on his part, have a certain inevitability about them.

While writing Mozart's Wife, I discovered I did not want to take sides. I understood and loved both my leading characters.

So Mozart does what men of his century were permitted, stabbing Stanzi to the heart. Being a woman of spirit, and comforted and advised by her cynical sister Aloysia, she hardens her heart and pursues an amour her own.

In this section of the novel, I moved onto fictional ground, although plenty of rumors from which I drew my inspiration are recorded in letters and diaries of the contemporaries. Meanwhile, there are operas and orchestral pieces being written, some with no buyer in sight, created simply because Mozart's evolving genius compels him. At the same time, there was less recognition and they were falling headlong into debt; there was no stability for the little family. Despair over his faltering fortunes sends Mozart to the bottle.

Babies are born and die, famous and infamous real life characters pass through their lives--Lorenzo DaPonte, the renegade Italian priest and lyricist for Mozart's big three--Cosi fan Tutte, Don Giovanni, The Marriage of Figaro--as well as the real life Casanova. There is also a large cast of musicians, male and female, who sing or play his music. Some were friends, some were false. Some were lovers--of both his music and of the man. And all through these years immortal music was being written.

While writing Mozart's Wife, I discovered I could not take sides. I understood and loved both my leading characters, despite their failures and flaws. I hope, if you read Mozart's Wife, you will too.

Here is a group of Mozart fans from twenty years ago, at the yearly birthday party I used to have for my hero. We drank syllabub and champagne and consumed all manner of party goodies. We swapped stories that we'd read about Mozart all while listening to his blissful music. Dear friends! 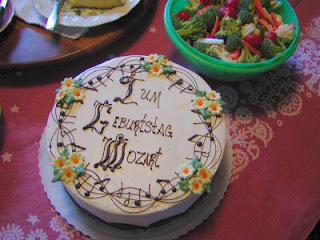 See all my historical novels @

Amazon
Barnes and Noble
Posted by Juliet Waldron at January 29, 2021