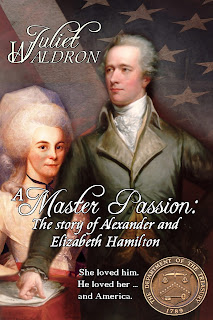 Barnes & Noble
KOBO
Smashwords
Amazon
Fellow BWL author Kathy Fischer-Brown and I took several trips into the rich historical area of upstate New York and one into New Jersey. I had seen re-enactments before, but Kathy loved these events, and being with her and therefore in good company, it made these experiences even more fun than before. As Kathy is gone now, and taken all her knowledge and wit with her, I'm dedicating this blog to the fun we had -- not to mention all the discomforts of travel on a shoestring -- we shared together.
If you are into the Revolutionary War, all these photos are of places and things that set a writer's historical spider-senses a-tingle. Re-enactors are an amazing source of period information. These are the kinds of touches that can truly flesh out a story, if only you take the time to ask questions and then listen while you trudge through roasting summer days, wondering at how our linen and wool-covered informants aren't fainting. 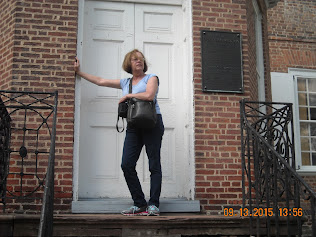 This is Kathy at the front door of the Schuyler Mansion in Albany, NY, where the Schuyler sisters grew up. I found those fascinating ladies back in the 90's when I wrote my Hamilton & Eliza story, a Master Passion.
Put brackets "" around mansion, though, as any number of modern monster McMansions are larger. Back in the 1770's though, this home was an outpost of Europe, with linoleum "rugs" over the wide board floors, as well as woolen carpets and ornate wallpaper imported from France. This house sat on the edge of a still truly primeval forest, filled with wolves, bears, beaver and many tribes of First Nation's people. 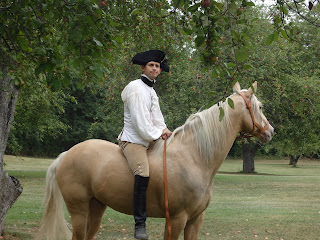 We thought he was amazing! Anyone who writes novels in this time period, even with the slightest brush of the romantic, has imagined this fella and his well-behaved palomino. I will admit that we waved and called to him hoping he'd wait for us so that we could take his picture. He was most gracious, even though women had probably been harassing him all day.  :) 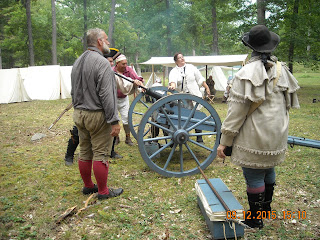 Here's an operation I wish I'd known about earlier, simply for the colorful language. These artillery people are engaged in a hither-to unknown (to me) operation called "puking the cannon." Cold water is poured down the hot barrel after a fight, to be sure it's clear inside and not accumulating gun powder residue. Sure enough, the cannon hisses and then "pukes" out a long jet of scalding water. Now the cannon is cleaned and we also know that it has not cracked. Cannons blowing up was part of the hazard of the artillery companies. As Hamilton spent the first years of the Revolutionary War as a humble artillery captain, this would have been a familiar duty. 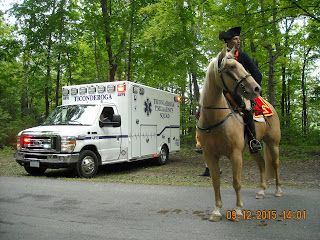 The inadvertent humor of re-enactment, present all the time, is in this juxtaposition of 2015 and 1776. The macadam, too, is often a reminder of where you really are, no matter how hard you are exercising your fantasy bone. 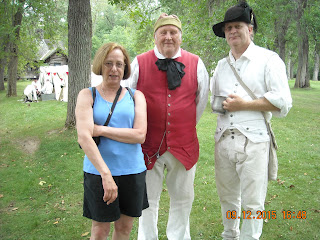 Kathy and the surgeons, British camp. These gentlemen showed us their instruments and we talked about wound care and the damage a pistol's .54 caliber ball could do to a leg bone or a chest. 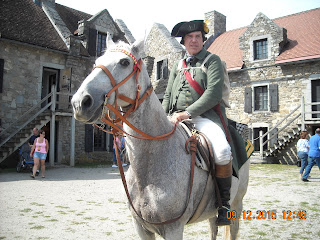 Inside Fort Ticonderoga with an officer with whom we "held discourse." Another memorable horse, very patient and obviously used to this kind of all-day nonsense.  The green jacket on the officer makes me believe he was playing a Tory officer, a British loyalist, but Kathy can no longer tell me of  what regiment. She had all that kind of information on the tip of her tongue.  Her "The Serpent's Tooth" trilogy draws a great picture of the divided loyalties of American colonists of the time. 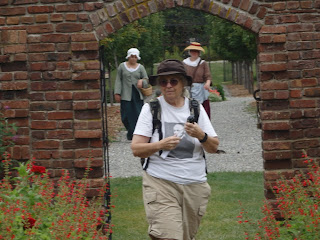 That's me, tactlessly wearing an Alexander Hamilton t-shirt into the grounds of Fort Ticonderoga's  "King's Garden." I got called on this a lot, especially when we were visiting the Royalist encampments. 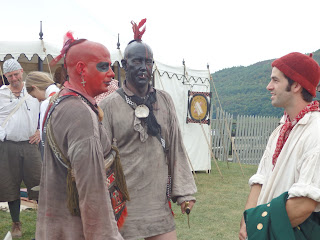 Magnificently terrifying Iroquois warriors, speaking with a soldier at the British market. 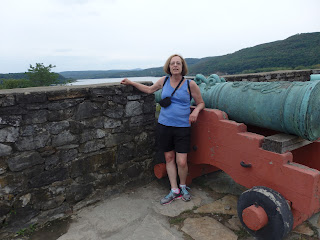 Ticonderoga cannons, overlooking Lake Champlain. Both of us lugged our cameras and water bottles. 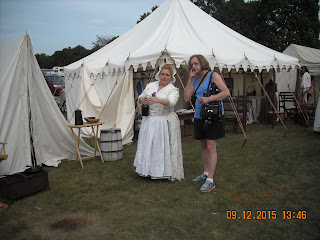 Here is Kathy with a friend. Jenna, a marvelous teacher, and is also an 18th Century seamstress, making period clothing for both men and women. She also made stays, which is, as it was then, an expensive clothing item, very difficult and time-consuming to make. Jenna's friends were also talented seamstresses and dedicated to the re-enactment life. I adored seeing their little ones, all dressed up and quite ready to join in the camp out game their adults were playing. 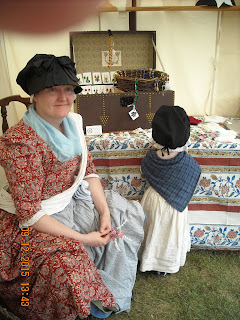 Here, we got a talk on the progress of the battle--back at Saratoga again--which was a three day affair with weeks of skirmishes both before and after in the countryside near Albany. Some of the young men were,, in their modern lives, historians, teachers or in forestry. Others were employees of the the Park Service. 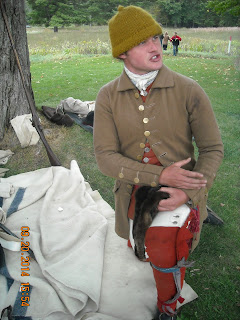 Here's Jenna again, playing another role, as sutler, vending produce to the army. Many of these veggies ended in a big pot at the fire for re-enactors' suppers.  Camping is a big part of the experience. 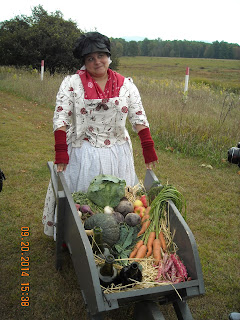 Mom and a pair of siblings. Big sister is an invaluable help corraling the little one! Here the women are portraying "women of the army," soldier's wives and children, who always slogged along in the baggage train of 18th Century armies. Women had no other option than to follow their husbands. Any army of that period had children in the baggage train too. The women worked as laundresses and cooks for the troops. Wives got a soldier's half ration and the children were allotted quarter rations. You can imagine how hungry--and ready to join up--the teen boys were! 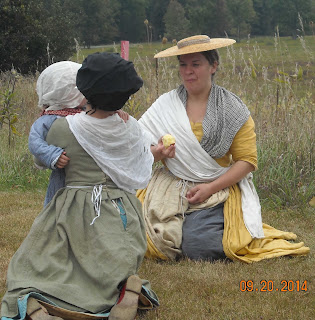 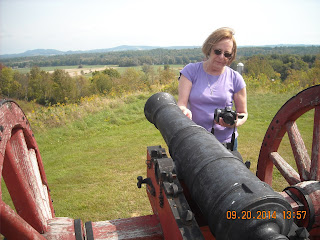 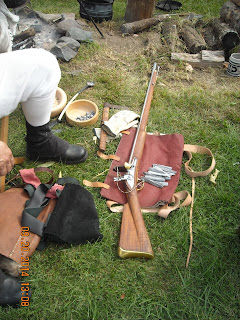 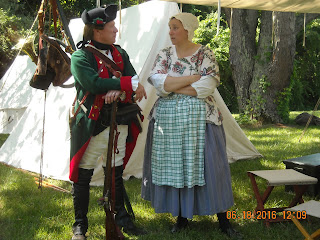 Officer and wife have a confab.
Below, we're at Monmouth, where young men were cooking in an earthen oven. They are also baking salt rising bread in this interesting construction, which was dug into the soft sandy soil of the site. The fire was in the largest hole with separate tunnels dug to direct heat onto other pots set above ground. Monmouth Battlefield that day was a period correct 90+ degrees.  Kathy and I were sweating in our t-shirts and shorts and constantly wondered about how the re-enactors were faring inside all that wool. More soldiers, I've read, died of heat stroke at The Battle of Monmouth than died from wounds. 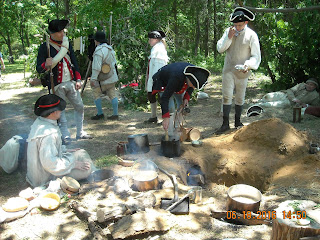 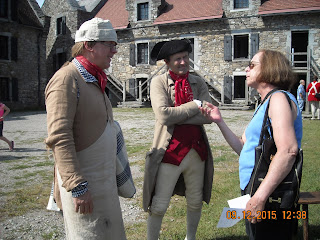 Here's Kathy, speaking with a charming doctor and surgeon at Fort Ticonderoga. Here's how I will remember her, asking questions, talking history and, if questioned, citing sources, holding her own with these equally history-drunk gentlemen.
Kathy Fischer-Brown's author page 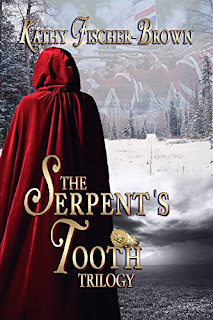