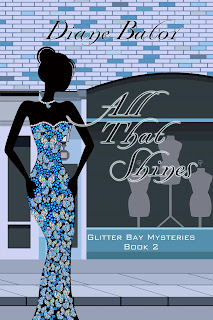 The story behind All That Shines...

A few years ago I was at my day job selling tickets at a professional theatre when a man came in to buy a ticket to a drag show we were hosting. As with any other customer, I asked for his name and address to add to our computer program.

I’m not ashamed to admit I had a moment where was I positive I’d misheard him, but I didn’t look up. In fact, I barely skipped a beat before I asked for last name and went on to collect the rest of HER information followed by a fun chat.

Over the years since, we’ve become friends and she’s stopped by to see me at work a few times. I’ve been thrilled to share in news of her engagement along with all the ups and downs of life. Truth be told, I’ve learned a great deal about from this amazing woman. Which is why I gave her full disclosure when I wrote All That Shines. I even gave her a copy of the rough draft for her approval AND I have a copy of the finished book waiting for her.

My favorite scene in the book is the moment where Hamlet tells Sage and her sister Laken that he is a woman and would like to be called Quinn from now on. Quinn was tired of people treating her like she was a joke and lamented how difficult it was to become a woman. Yes, Sage and Laken have a moment of “is this for real?”, but in the end, they honor Quinn’s wishes and she quickly becomes part of the staff. In fact, Quinn Evans has become one of my favorite characters. Her honesty and openness bolsters Sage, who has always felt overshadowed by her supermodel sister, until she begins to shine in her own way.

I didn’t consciously set out to create a transgender character. She grew organically from a blend of people I know and love, as well as a need to tell a different story. While I share in my friends’ journeys, I would love to expose the good and the bad, but in a way that only a cozy can – gently and with love. True in this book no one has harsh judgements of her because no one has really gotten to know her yet. Once they realize she’s settling in for the long haul all that can, and will, change.

Cozy mysteries don’t normally deal with controversy which is why I had to walk softly. I wanted Quinn to be a character that readers could reasonably suspect of being a murderer, yet they rooted for her not to be.

True, Quinn is a little different, but deep down aren’t we all?

I find that real life is constantly being drawn into my books. Incidents that happen. Conversations I have or overhear. What a better way to make settings and characters feel more real than by drawing in reality.

Have a wonderful day,