What a Day for a Daydream by Diane Bator 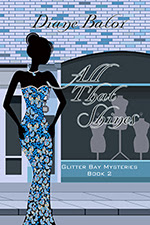 I used to be an avid reader and a prolific daydreamer. I’m not sure which made me a better writer, but the two did conspire to actually make me a writer. Daydreaming was the way I originally created stories. As a kid, I would go off into the hayfields and pick strawberries on sunny afternoons. It was during those lazy summer days with my fingers and tongue stained red that I would daydream about appearances on the Oprah Winfrey show, starring roles in plays and musicals, and being an author.

By the time I got home, I was ready to pencil those fun, meandering stories onto loose-leaf paper. Sometimes, I’d share them with my friends or my mom. Most of the time, however, I’d tuck them away and keep them to myself. Little treasures that lived in my own mind and in a shoe box under my bed.

As I grew up and went off to college, the daydreams matured and took on longer lives of their own. I longed to be an author, but it was one of those things that people only did for fun. I was actually told that “writing isn’t a career” and to get a real job.

Sadly, I believed it and stopped daydreaming.

I got married and had kids. Then a funny thing happened.

The daydreams came back. I have to say daydreaming with kids can be a lot of fun, especially stomping through the woods on a hike--which became a quest with sticks in place of swords. Or camping in a tent while the rain fell around us. I wrote stories about kids being turned into mice, little blue hippos in the wild, and even stories about bullies in schools. The stories we wrote were just for fun. I’d never even thought to publish them. Those stories and poems were created just for my kids.

One day, I dusted off some of those old stories I’d written in college. I still wasn’t ready to share them. They went back into a drawer. Instead, I went for long walks and discovered new daydreams. More vivid and detailed with more twists and turns. Daydreams that led to stories, which then became books.

This time, I chose to follow my heart – and my daydreams.

And I became a published author. Many times over with no end in sight.

All because of a daydream I had as a kid that one day I’d write books.

I still haven’t been on the Oprah show, though.

Find many of my daydreams at:

Email ThisBlogThis!Share to TwitterShare to FacebookShare to Pinterest
Labels: #BWLPublishing, #canlit, All That Shines, All That Sparkles, daydream, Diane Bator, published books, writing