Hostas are some of my favourite perennials as they’re showy, easy to grow and like shaded spots. My hosta garden is on the south side of the house beneath an ornamental crab apple and they really seem to love it there. Which reinforces my mantra to find the plants that like the space you have – it makes you look like a gardening genius! Here's my shade garden during July a few years ago. I planted sweet woodruff and cranesbill geranium along with the hostas. 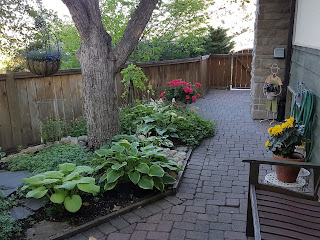 These plants are native to Korea, Japan and China where they are found in moist woodlands, along stream banks and rivers, and open grasslands. They’re also known as Plantain Lily, Funkia and Corfu Lily. Their known use as a garden plant, food, medicinal herb and a source of aromatics goes back to the Han Dynasty. A Chinese legend has it that a goddess dropped her hairpin from which grew the beautiful hosta and often the decorative part of a woman’s hairpin is made from jade shaped similarly to the unopened flower.

The first hostas appeared on the European continent in the 1780s and at that time were grown under glass for its tropical attributes.

They’re hardy and long lived and although I have mine in a bed, they also do well in containers and rock gardens. They come in a variety of sizes, colors and textures and usually have a spread and height of between 1 and 3 feet. While they’re mostly known for their lovely foliage, the plants also produce lovely spikes of flowers in shades of pink, white, light blue and lavender. Hummingbirds and bees really love hosta flowers. You can see the hosta flowers in behind the pink geraniums: 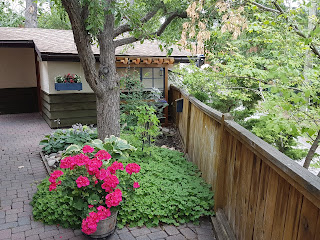 Hostas do best in dappled or deep shade because of their large leaves but they can take the heat of full sun if they’re kept in moist, fertile soil. Snails, slugs, rabbits and deer like hostas so keep an eye out for those pests.

Plant potted hostas any time but probably best in the spring. Put them at the same soil level as in the pot and water until the soil is moist. I use 20 20 20 fertilizer after planting and also when new growth comes in the spring. My hosta bed has automatic sprinklers so they get a shower every morning around 5 am which keeps the soil nice and moist. You can pinch the flower stalks to encourage new growth however I never bother. Maybe that’s something I should try this year!

It’s best to transplant and divide in the early spring when the leaves just start to poke through the crown. They don’t usually need dividing, however, because they will simply grow less quickly if they have less space. They are slow growers and may take two to four years to reach their full size. Below you can see the hostas poking up through the petals of the ornamental crab, in late May, and below that, the hostas in late July. 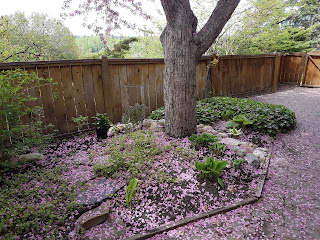 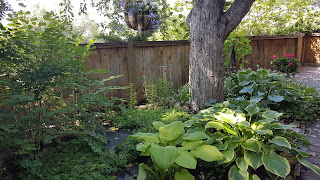 Young hosta leaves are edible, with a flavor similar to lettuce and asparagus. In Japan, they’re known as urui and are boiled, fried in tempura or eaten raw. If you want to try this, boil them for about 20 seconds until the leaves are bright green. They’re sometimes included in salads to add texture more than flavor. The flowers are said to have anticancer properties and are also edible with a peppery flavor. The essential oils obtained from the leaves are used in perfume. 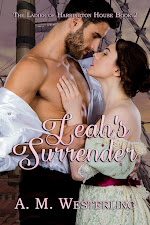