The Mummy of Mammoth Cave by Katherine Pym 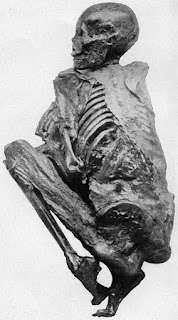 Not long ago, I found a book in my bookshelves I didn't know I had. It's a guidebook of sorts of the great mammoth cave in Kentucky, a massive structure with more than 400 miles of surveyed passageways. There is little information out there about the mummy so my newly found book will have to suffice as the extant knowledge of the mummy's description.

Apparently, there was no time frame of when the cave was discovered. It's been available to countless peoples over the vast period of history.

The mummy is considered female, and found in the early 1800's by miners who were part of saltpeter operation during the 1812-1814 war with Great Britain. Because of the British blockade, weaponry and ammunition were hard commodities to find.

No one knows her origin, but some say the body is similar to burial rites in pre-Columbian era. Her hair was a dark red and she was considered tall for the times, 5' 10". When discovered she was in a fetal position, much like the Inca mummies, with wrists bound over her chest and lower legs crossed. Since this finding, her body has disappeared, or so this book says, and to be realistic, there is little printed on the mummy of Mammoth Cave.

No one knows if she was murdered or sacrificed, for someone stabbed her in the ribs.

They gave her the appellation of "Fawn-Hoof" because of the red fawn hooves found with her body. Along with the hooves, supposedly things to carry her into the otherworld were : an eagle's claw, deer skins, rattlesnake skins, caps of knitted bark, a bag of the same material, seven feather headdresses, one for each day of the week, bird quills not sharpened, and several necklaces, the seeds smaller than hemp seed, all strung together. In the stash were horn and bone needles, sinew used as thread.

Her red hair had been shorn to the scalp, with an inch left at the nape of her neck. It was surmised at the time (early 1800's), those who cut off her hair considered it such an unusual color, they used it for sacred rites.

She was wrapped in deer skins, their unknown origin designs of vines and leaves which had been stretched in a stark white substance. She lay on knitted or woven bark in the appearance of South Sea mats. Her skin was dark but not African American.

And so it goes. With the mummy lost who some say museums or stored in a private archive, what was originally described as "Fawn-Hoof" will remain the only technical observations, and that was approx 1813. A great mystery which will probably never be unearthed.

Many thanks to: Mammoth Cave and the Cave Region of Kentucky by Helen F. Randolph, The Standard Printing Company Inc., Louisville, 1924

For more about my books visit my BWL author page:  https://bookswelove.net/pym-katherine/