During lockdowns for COVID-19, many people turned to hobbies, do-it-yourself projects, or exercise for mental and physical well being. One thing that fit all the  criteria is gardening.

Now let me say first off, I did not voluntarily decide to be one of those who turned to a garden for therapy or exercise. I have what has been called a brown thumb. Over the years, my brown thumb has killed plants, bushes, and other green living things including cacti, ivy, grass, forever plants, and azalea bushes. Some of which are under normal circumstances almost indestructible.

What makes my ability as a terminator more remarkable is that I grew up on a farm in the "Garden State." And, yes, that is the official nickname for my home state.

Besides the cash crops of eggs, sheep, wheat, corn and such, we had a lilac bush so big you could ride a pony through the middle of bush. In fact our Shetland pony and a sheep used to play hide and seek and tag using the bush as shelter and hidey hole. The weeping willow tree that was as tall as our two-story farmhouse provided hours of play on the tire swing or shade for reading and cloud watching.

As  might be expected we also had a garden. It provided fresh vegetables for the dinner table and extras for canning and friends.  One of the many chores and tasks needed to keep a farm running was pulling weeds and hoeing the garden. As you can see I  am not a total stranger to gardening and plants. It is just that when it was my garden, my house plants, my landscaping, they died.

After my move south, for several seasons I tried container gardening. As to why containers were selected?  I couldn't decide where on the property to put the garden. Another consideration? Farm equipment and sibling labor were not available and I was not going to turn a plot over by fork and spade by myself.  Of course I didn't have any luck with the several tubs of tomato and pepper plants I attempted to grow.

This spring a local DIY (do-it-yourself) store gave away a different project each week and several family members decided to participate. The lobby pine given out died within three weeks. The milkweed seeds didn't get planted. That will happen when I build the butterfly house part of the project.

Pepper and tomato plants were the next weeks project. For being the first in line the stock boy coordinating the distribution handed me a bush-type tomato plant. It was shortly afterwards paired with a vine type a family member donated to the project. The vine tomato is just now producing, Its fruit are the size of golf balls, a far cry from the large ones that were already harvested. 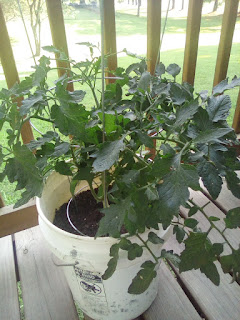 It has been very interesting experiment. The plant are on my covered back stoop. Besides watering (or keeping them from getting drowned in the summer storms), they were shifted against the house when they needed protection from high winds. Of course I did have to rely on someone who had successfully gardened in the locale as the climate and conditions are drastically different than what I was familiar with. (And so are the bugs, including a very aggressive green species.) So much time (think decades) had passed since those early childhood gardens, that research on the care and feeding of the two very different plants.

Authors are always told to write what you know. Which must be why none of my characters insisted they be master gardeners. So far the only one who has any real experience is Deneas whose tale is told in my current work in progress, Fire and Amulet (scheduled for release next year.) If any other of my characters are gardeners, they will probably be hydroponic engineers who are in trouble because of a brown thumb.

Here is what happened to her garden. To set the scene, it is the evening before she leaves on a journey from which she will probably never return.

An idea formed on how to thwart Karst from getting anything he hadn’t earned. Instead of sleep, she spent the cool candlemarks under the moon pulling the root vegetables that were ready for harvesting. The red fruit that hung heavy on the vine filled another large basket. Next she took the growing pots her mother had made or bartered for and by the time the moon was full overhead had half the garden in pots ready to be gifted to others in her village.


This experiment has given me a greater understanding of why some assisted living facilities have a raised garden for their residents. The daily routine of watering, snipping errant sucker vines, and monitoring for bugs and ripeness can be therapeutic.

As to whether I will try gardening again ? That remains to be seen. I prefer more interactive beings. Depending on their loquaciousness, you can actually hold conversations with a dog or cat. Our 18-year-old cat could quite clearly say "Now" and "Out." And when she's in a good mood, the husky I visit, can talk your ear off. Especially if you answer her.

~Until next month, stay safe and read. Helen