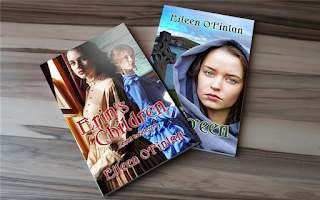 One of my favorite spooky sites in Vermont is the Bowman Mausoleum in Cuttingsville across the street from what used to be The Haunted Mansion Book Shop.

When my grandparents were alive, my family traveled several times a year from our home in Massachusetts to their home in Vergennes, Vermont. On the way, we always stopped in Cuttingsville to check out the book shop and get a glimpse of the mysterious figure in the cemetery.

The figure is John Porter Bowman, or rather a statue of him. Bowman was a Vermonter who, in 1852, moved to Stony Creek, New York with his wife, Jennie where he became the wealthy owner of a tannery.  The couple welcomed their first child, Addie, in 1854. Sadly, the baby died at only four months. Another daugher, Ella, was born in 1856. Ella died at age nineteen, followed within a year by Bowman's wife.

Having lost his entire family, the deeply grieving John Bowman moved back to Vermont where he purchased land in Cuttingsville, the town where he first learned the tanning trade. At Laurel Glen Cemetery he had a mausoleum built by over 100 skilled stonecutters. The bodies of his wife and two daughters were brought to Vermont and interred in the mausoleum in 1881. After that he had a mansion which he named Laurel Hall, built across the street so that he would be near his family and could visit them often. At the same time, he commissioned a statue of himself, dressed in a mourning cloak and carrying a mourning wreath. The statue was placed just outside the mausoleum's door. Grief is etched into the statues face as Mr. Bowman eternally mourns his family. 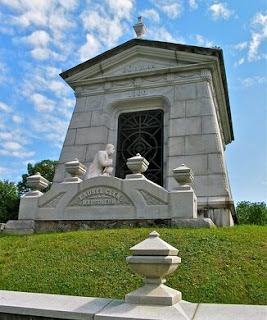 The Bowman Mausoleum                                        John Porter Bowman in mourning
Bowman also had a greenhouse built on the cemetery property in order to always have fresh flowers available to adorn the final resting place of his loved ones. Once completed the mausoleum became a tourist attraction. Vistors came by the thousands. Bowman had a guest book placed inside and hired a guide to provide tours.
In 1891 John Porter Bowman died and joined his family for eternal rest inside the mausoleum. He left money specifically for the upkeep of Laurel Hall. Perhaps he believed in reincarnation because the instructions he left behind were for a caretaker to not only keep Laurel Hall in good condition, but to have the table set for the family's dinner every night in case he and his loved ones decided to return for a hot meal. The funds ran out in 1953 and most of the furnishings were sold.
By the time I was a teen, a couple had purchased the property and turned it into a book store. Perhaps it was due to the mausoleum being prominent at the top of the hill directly across from the mansion or maybe it was all the stories about both the mausoleum and the house being haunted or maybe it was the odd request for the table to be set every night, but whatever the reason the new owners decided to christen it The Haunted Mansion Book Shop. It certainly drew attention. 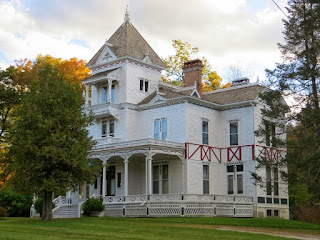 Laurel Hall - The Bowman Mansion and for a while
The Haunted Mansion Book Shop
Many a strange tale was told about the place which naturally made my teen self eager to check it out. Over the years that we traveled back and forth to my grandparents' house in Vergennes we made it a habit to stop at the book shop. It may have been nothing more than the power of suggestion, but I did get a creepy feeling (that I relished!) every time I entered it.
Sadly, the book shop is now closed though the historial society still maintains the property.