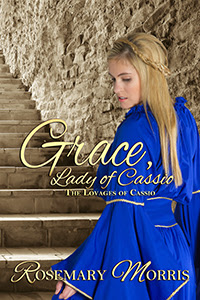 To find more of Rosemary's work please click on the cover above.

Food and Drink in The British Isles.

I suspended belief when I began to read a medieval novel set in England written by one of a famous publishing house’s authors.

An armed Norman knight in full armour with a shield on his back scaled a castle’s stone wall to rescue the heroine locked in a turret. He is described climbing through a lancet window (an impossible feat). The maiden welcomed him and asked him if he would like to have a cup of coffee, and eggs and bacon with fried bread for breakfast.

My mind boggled! Coffee was not imported to medieval England and, even if the beauty in distress had the means to cook, she would not have served that food for breakfast.

What people ate in the past can be a minefield of errors for me and other historical novelists. Prior to Christopher Columbus’ return from the New World potatoes were not known in the Old World. Novelists should never assume that because potato blight caused famine in Ireland potatoes reached the British Isles before the late 1500’s.

An error in novels by American novelists is often the assumption that, on the other side of the big pond, corn means sweetcorn. It does not. The old corn markets were held to sell wheat.

Tomatoes, also introduced from the New World were rare and, at first, considered poisonous. Later, people did not know whether they should be eaten as a fruit or a vegetable.

Fresh fruit and vegetables were eaten in season unless, for example, strawberries were grown in a hothouse owned by a very wealthy person. Strawberries ripened at the end of May or in June. If they were eaten at any other time of the year they would have been preserved. I imagine a thrifty housewife serving them as a treat in winter.

When I write historical fiction, I check and double check what my characters eat and drink. Once, I assumed Camembert cheese was imported from France in the early nineteenth century and described a character enjoying some in1813. I researched Camembert and found out it was first made in 1790, and not produced in large quantities until the 1890’s.

There were no bars or boxes of chocolates. At first it was served as a hot drink made with grated cacao whisked with milk sugar and water or from cacao paste. Ladies drank it first thing in the morning, and chocolate houses later supplanted by coffee houses, were popular.

Eight of my novels are set in the ever-popular Regency era, so I have included are a few notes from my research that helped me avoid anachronisms.

“Vegetables are cheapest when they come into full season. All vegetables are best if dressed as soon as gathered; and are in greatest perfection before they begin to flower. Most articles for pickling will be in their prime from July and August; but walnuts not later than the middle of July; and mushrooms and white cabbage in September and October.

Herbs should be gathered on a dry day, and when the roots are completely cut off and perfectly well cleaned from dust, etc., they should be divided into small bunches and dried very quick by heat of a stove or in a Dutch oven before a common fire, rather than by the heat of the sun, taking care they be not burnt When dry put them into bags and hang them up in a dry place, or pound them and sift them through a hair sieve, and keep them in bottles closely stopped. Sweet and savoury herbs are best in fragrance from May to August, according to their kinds. The flavour and fragrance of fresh herbs are much finer than those that are dried.” 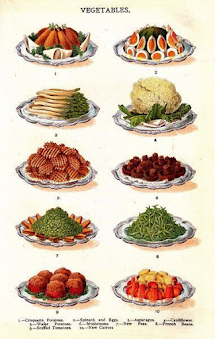