The Baddies in My Books by Victoria Chatham

I always have trouble creating evil characters. I would say that most have mine have been flawed in some way rather than truly evil. Except for, maybe, Sir Peregrine Styles in my first Regency romance, His Dark Enchantress. Sir Peregrine was very much a depraved character, particularly in the satisfaction he derived from causing pain or trouble to others. He was a narcissist, manipulator, and opportunist all rolled into one character but none of that was greatly surprising given the era and strata of society he grew up in.

People being people, and our characters are people if only in our minds and books, good and bad can 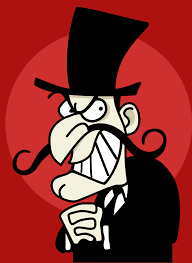 come from anywhere. The best of families could have one bad apple. A family in the poorest area of town may have a dad with a heart of gold and a mum who will do anything for her children first and her neighbours after that.

People can and do change and here Rose of Sharon in Steinbeck’s Grapes of Wrath springs to mind. Circumstances can mould a person. Disappointment after disappointment may eventually turn a happy, positive person bitter and cause them to seek revenge against those he or she believes responsible. Being brought up in an abusive household may produce another abuser or someone who would never lift a finger against another person.

As authors, building the backstory for a flawed or evil character is as intriguing and circuitous as those of our main characters and, dare I say, might take a bit more of a psychological twist. Writing historical fiction means dipping into the social history of the era whether, in my case, it is the Regency or Edwardian eras. The class structure was pretty much adhered to. People ‘knew their place.’ But within that structure, the mores of the Regency became stricter through the Victorian era and began to ease again in the Edwardian era, especially the La Belle Epoch era in Europe which dated from the early 1870s up until the outbreak of World War 1.

Regency characters who held ambitions to rise above their place in society might be referred to as ‘mushrooms.’ The term ‘nabob,’ originally denoting an official under the Mughal Empire, came to be used somewhat derisively for a pretentious person, especially one growing his own wealth rather than inheriting it.

My current ‘baddie’ is one Ruby Baker in Phoebe Fisher, the third book in my series Those Regency Belles. Ruby is a barmaid with took my hero’s promises to heart. In a drunken moment as an eighteen-year-old and about to embark on his first voyage, Andrew promised to bring her jewels from India. Ten years later, Ruby arrives on his doorstep to collect them. However, now Andrew has inherited a title and gained a wife. What will Ruby do? I’m still working on that.

Posted by Victoria Chatham at November 23, 2021