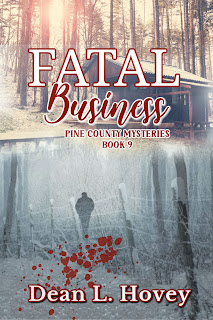 My Pine County series is set in an area blessed with geography that makes it ideal for the mystery genre. As a former Pine County Sheriff said, "The county is half swamp. It's the perfect locale for the disposal of dead bodies." Pine County, in east central Minnesota, is 1,500 square miles of what used to be rocky farms, state forests, and swamps. The farms and farm buildings have fallen into disrepair as it became impossible to eke out a living on a 40-acre family farm tract. The small towns, especially those bypassed by I-35, have shriveled. What's a mystery author to do when most of the towns in the county have a population of less than 300 people?

Well, it is fiction, isn't it? Look at the wonderful British Midsomer Murders television series. They've done a dozen or more episodes a year, all set in fictional Midsomer County. Many episodes kill off 3-5 people. After 22 seasons, I expect the population of Midsomer is down to four cops and the undertaker!

I struggle a bit with the same issue in Pine County. After eight books, I've killed off someone in every large municipality in the county! So, I moved book 9 to the tiny town of Askov. In the early 1900s, it was a bustling community of Danish residents. It's now much smaller, and quieter than during its heyday. I'm not saying it's dead. Not at all. They still host an annual Rutabaga Days Festival on the 4th Saturday in August. A rutabaga queen is crowned, there is a venue selling rutabaga-flavored malted milks (there's always a line, so they must be tasty), and there's a parade. Last year's parade featured several floats, and the sheriff's mounted posse. Interestingly, they had the politicians walk behind the horse-mounted posse, which led to a (sort of) slalom around the horse droppings. Politicians, being focused on shaking hands and kissing babies, didn't always step around all the horse "apples" being deposited in the road. I was initially surprised, then saw the humor in the arrangement.

Anyway, back to the setting: In choosing a very small town, I was forced to invent a business that doesn't exist. Aside from a fictional tire business, every small town has its own characters, rumors, pecking order, and murder motives. Without digging into the affairs of the Askov residents, I created a cast of fictional characters who have all the quirky personalities of any North American small town. There's a salt-of-the-earth farm couple who welcome the police surveillance team into their barn, then nearly blow the whole operation by bringing them coffee and meals. There's a business staffed by white-collar parolees from the local prison (suspects in every local crime). There's a family business with grown children who don't want to work in "dad's" miserable shop. And there are my favorite Pine County Deputies, who are dedicated, smart, a little sassy, and sometimes irreverent. One Arizona reader pointed out that his greatest appreciation of the Pine County Deputies is their ability to consume copious amount of coffee without making any bathroom stops. (I'll have to work on that.)

If you happen to be in Askov at noon on July 16, please stop off at the Pine County Historical Society. They've invited me for Askov's first-ever book reading. Afterwards, tour the exhibits, or drop into the Little Mermaid Cafe for a cup of coffee.