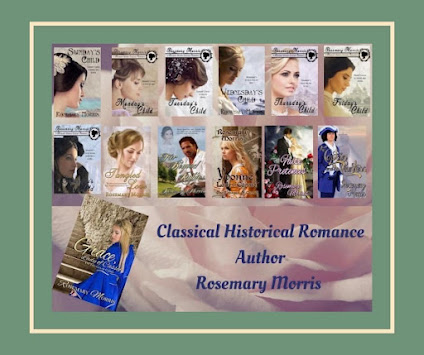 To learn more about Rosemary and her work click on the image above.

There is a hypothesis that there are only seven basic plots. This should not deter novelists, who can devise their own special twists in the tale and write from the heart.

What is Historical Fiction? The Historical Novel Society’s definition is: ‘The novel must have been written at least fifty years after the event, described, or written by someone who was not alive at the time, and who therefore only approached them by research.’

I think novelists, who set their books in times past, are under an obligation to readers to transport them into another time based on fact. My characters, other than historical figures, are imaginary. To ground my novels, I weave real events into my plots and themes. To recreate days gone by, I study non-fiction and, before covid, visited places of historical interest, including museums.

There are many excellent novelists who write, historical fiction and genre historical romance, etc. Unfortunately, there are others who cause me, and, presumably, other readers, to suspend belief. I was torn between shock and hysterical laughter when I read a medieval romance in which, the hero, a knight in full armour, galloped to a castle to rescue a proverbial maiden in distress. Without putting aside his shield and weapons, he flung himself off his horse and scaled stone walls with no handholds or footholds. He then climbed through a window - impossible as a castle in that era only had narrow apertures. When he gained access through the mythical window, not affected by her ideal the fair heroine asked: ‘Would you like some eggs and bacon and a nice cup of tea,’ as though she were offering him a modern-day English breakfast. The sense of the ridiculous overcame me. I lost faith in the author and did not read on.

Of course, the above is an extreme example from a novel accepted by a mainstream publisher. However, I am frequently disappointed by 21st characters dressed in costume, who have little in common with those who lived in previous eras. Over the centuries, emotions, anger, hate, jealousy, love etc., have not changed, but attitudes, clothes, the way of life and speech has. A historical novelist should study these and do their best to verify the facts.

Misnamed characters also make me pause when reading. The first pages of a medieval novel held my attention until I reached the part when the heroine’s name was Wendy, which, J. M. Barry invented for his novel Peter Pan. I daresay I’m not the only historical novelist, who agonises over characters’ names. I recommend The Oxford Dictionary of English Christian Names, an invaluable resource.

In conclusion, a skilful historical novelist should hold the readers’ attention from the first page to the last and take them into the realm of fiction on an accurate, enjoyable journey.