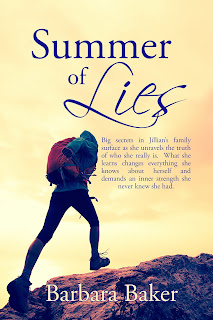 Going to Lethbridge, Alberta. Those familiar with Alberta geography might say ‘why’. Others might suggest putting rocks in my pocket. Both are valid statements.

First stop, Head-Smashed-In Buffalo Jump - a UNESCO World Heritage site west of Fort MacLeod. The site preserves and interprets over 6,000 years of Blackfoot culture. According to the legend, a young boy wanted to see what it looked like when buffalo fell over the cliff. After the carcasses were removed, they found the boy’s body. The buffalo piled so high they smashed his head into the face of the cliff.

As I read the plaques along the trail, I try to imagine what the first buffaloes felt when they realized going over the cliff was inevitable. Or would a buffalo realize their demise was imminent? 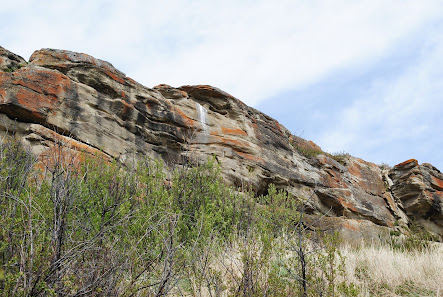 The views across the plains are endless to the east and west. The lemon-yellow buffalo bean leans in the breeze and mixes with the wild rose scent as the landscape runs into the snow-covered Rockies. 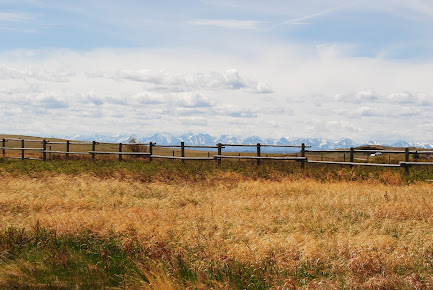 After a quick lunch stop, we head for our destination. Lucky for me, there is road construction outside Lethbridge and it’s at the best vantage point for a picture of the train trestle referred to as the High Level Bridge. I jump out of the car, dash to the edge of the ridge, snap a few pictures and am back in my seat before the flag person waves us on. 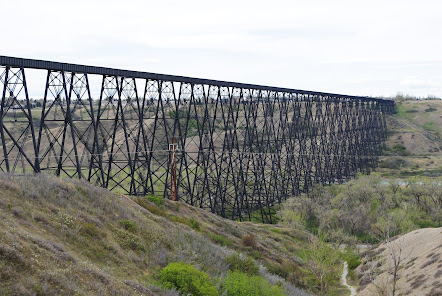 I came here to learn about fossils. As a newbie rockhound with a ‘still shiny’ rock hammer, I’m keen to have fossil names roll off my tongue. If they didn’t have so many syllables it would be a lot easier – Brachiopoda, Articulata, Pachyrhinosaurus. I can remember red rock is pomegranates, but it took me a few times to realize ‘never take me for granite’ is rockhound humour. Also…faults, plates and shifts sound impressive if I could just remember the right sequence which creates the seam I stand on.

The specific type of rock I want to find is called Ammonite. To be honest, unless it’s stamped on the rock ‘I’M AN AMMONITE’, I’m not sure I’d recognize a fossil. But I love being outside and like shiny things so I’m game to see what I can find.

Spring run off hasn’t started which makes it easy to walk along the wide banks of the Oldman River. With safety glasses on, I smash rock in the bank and watch it crumble. Nothing. I crack boulders as a pair of adult geese and 18 goslings float by. They make me thankful I only have three kids. 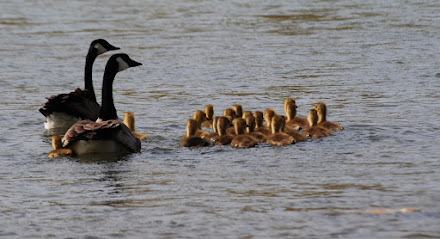 Bald eagles scout out their next meal as I roll stones over. 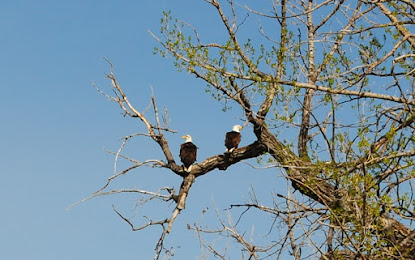 Trails run up the banks and into the river valley. A couple mountain bikes zip by. A fisherman with the biggest smile waves a large whitefish at us. More rock smashing and then around the corner, I see a cliff. Even in my newbie rockhound status, I can tell the layers in the face are different. Too bad it’s across the river. Apparently, people have found shark teeth in the sediment. 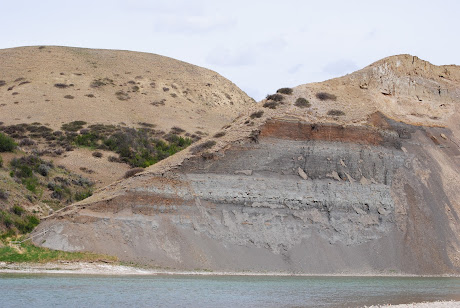 I did not find any Ammonites but am pleased with the lava rock (almost light as a feather) and worm fossils I uncovered. A fun and educational road trip with great food along the way and, of course, red wine. 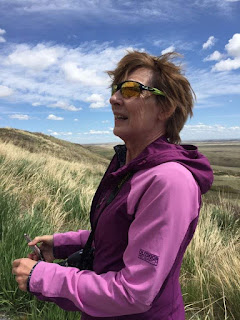 Where are you going? If you could go anywhere, where would you end up? 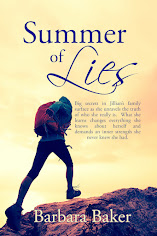 Smashwords – About Barbara Baker, author of 'Summer of Lies'