SEDUCING SIGEFROI is out - by Vijaya Schartz 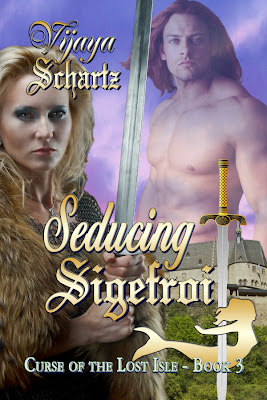 Yes, this is the definite cover, and I'm very happy with it. The heroine looks like a dark water creature and wields a sword. He looks fierce, not as red-headed as the real Sigefroi, but so yummy, who cares?

Luxembourg - 963 AD - To offset the curse that makes her a serpent from the waist down one day each month, Melusine, exiled Princess of Strathclyde, must seduce and wed a mortal knight, the shrewd and ambitious Sigefroi of Ardennes.

Sigefroi, son of the Duke of Lorraine, suspects Melusine is not what she appears, but her beauty, her rich dowry, and her sharp political skills serve his ambitions. He never expected her to soften his stone-cold warrior heart.

So close to the Imperial court, dangers and intrigue threaten Melusine. War looms on the horizon, a Mermaid was sighted around Luxembourg, and Sigefroi’s bishop brother questions her ancestry. If anyone ever suspects Melusine’s true nature, she will burn at the stake...

FIND ALL THE BOOKS IN THE SERIES SO FAR:

LADY OF LUXEMBOURG (Book 4): is scheduled for release later this year.

Grab it, like it, give it some love with "likes" and tags.
Hope you enjoy the read.

Hi, Ginger here, and I liked this post so much on my own blog, I decided to share it here.  Hey...tis the season of TV reruns...why not blogs?  :) 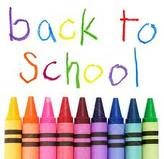 For someone who has been seriously writing for the past dozen years, I've absorbed a thing or two..  The very first thing I learned is the vast difference between telling a story and being a novelist.  You must engage the reader and make them want to become part of your story, and here are a few things you can do to insure that:

1.  Hook the reader from the beginning.   It's a proven fact that if people are bored with the opening of your story, chances are they aren't going to even finish the first chapter.  Your story must be engaging...yang the reader in and hold them fast with a desire to find out more.  Make them want to put on the character's shoes and walk in them.  Don't make them guess whose POV they're reading from, make it clear, and if you change to another, make that even clearer.

2.  In order to accomplish number one, there are few more fundanmentals you need to apply.  Don't TELL the story, SHOW the reader what's going on.  The difference:  If you've amply displayed emotions, the reader is going to feel them.  Don't just TELL the reader  the heroine is crying, SHOW them the pain shooting through her heart, the emptiness in the pit of her stomach...give them someone with which they can identify.  Make them remember what it felt like to lose their first love...in other words, let them experience the pain. 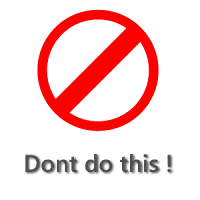 3. Avoid redundancy.  The reader doesn't need to be told on every page what color the characters eyes are or that the courch is on the far wall.  As an author, I know it's easy to duplicate information you've already shared, so reading your story aloud helps you discover places where you've echoed words or information.

4.  Speaking of words echoes...this is one of my pet peeves.  I detest reading the same word over and over in the same paragraph.  I realize there are instances where the word is duplicated for a definite purpose, but most of the time all word echoes do is indicate to the reader that you're a lazy writer who doesn't want to take the time to find another word with the same meaning.

5.  My newest "learn" is to avoid unnecessary verbiage.  For example, if you are firmly in someone's POV, it is not necessary to tell the reader who is doing the feeling, hearing, seeing, etc.  As in using word echoes for emphasis, sometimes, you will need to stress the obvious, but in most cases, using "he heard, he felt, he saw, he watched" can be eliminated. See the difference:
She watched him unfasten his belt and saw him drop his pants to the floor.
He unfastened his belt and dropped his pants to the floor.
If you are in her POV, then we already know who is watching and seeing, so why expose the obvious?

6.  Watch your apostrophe's.  It's and its aren't exactly used the same way as other possessive words.  Your and you're also take on entirely different meanings.  Their and they're are another great example of two meanings, and then if you add in "there" then you have a triple threat.  These mistakes are hard to catch even if you proofread till the cows come home.  As an author, our mind reads what we think should be there, so another important tool in writing a great novel is having an aswesome critique group or beta readers.

7.  Using "that" in sentences where you don't need it, is common place. This simple mistake was the main reason "that" a very good story was rejected.  If you read the sentence again, you'll notice "that" "that" is not even required.  The rule of thumb...re-read the sentence without "that" and if it makes perfect sense, then delete "that."

8.  Avoid "ly" words when possible.  Sometimes they are a necessity for emphasis, but usually, if you try, you can find a stronger verb to use.  Example:  She stepped loudly across the floor, can be She stomped across the floor.  Or how about, he spoke softly can be he whispered.  Get the idea? 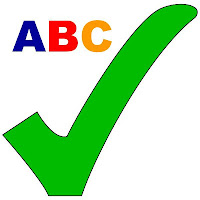 9.  Spell checker won't help in instances where you've used a correctly spelled word.  Like the apostrophe dilemma above, hear/here, there/their, to/too, then/than, and a thousand other examples.  The English language is one of the most difficult to learn, and even if you know it, it's still a challenge.

10. Don't go crazy with punctuation.  I've discovered that house rules are what dictate commas, semi colons, and exclamation points.  I was surprised upon re-releasing oneof my novels to find the editor for the current house put back in every comma the previous house had removed.  Even though I was advised semi-colons are not appropriate for fiction, you'll find them in my current version.  House rules rule, and that's not being redundant.  :)

Just for your information...some of us dislike internal thoughts, especially in third person, unless they are done extremely well.  For me, because of the sudden tense change, they pull me right out of the story and make me wonder why the author didn't just paraphrase.  See what you think:

Jasmine craned her head to the side, allowing Damon's lips to trail his lips along her throat.  Boy, does that feel good.  I hope his kisses are this good.

Jasmine craned her head to the side, allowing Damon's mouth to trail along her throat.  Her body tingled in anticipation, warmness gathering in her very core. Would she be as impressed once their lips met?

Oh, and one last tip...Avoid unnecessary tags.  If there are only two people in the room, the reader can usually figure out who is speaking.  Mary said, John said, Mary said, John whined, become boring after a while.  If you feel you must use a tag, use one showing action.  Have the character do something to identify them before or after the dialogue.  Mary crossed to the sofa...John lit his cigar...Mary moved to the window, admiring the bounty of color in the garden.  Instead of boring tags, you can add visual scenes that enhance the story.

Okay...I could probably list ten more, but I'll save those for another day.  Happy writing.
Posted by Unknown at July 20, 2012 No comments:

Email ThisBlogThis!Share to TwitterShare to FacebookShare to Pinterest
Labels: books we love, Do this and don't do that, Ginger Simpson, Recycled Post, writing tips

We announce our latest releases, contest news and reviews on Facebook daily. Check us out while you're there! "Like" Books We Love and get the news directly on your home page.

Working on the cover of SEDUCING SIGEFROI

After PRINCESS OF BRETAGNE and PAGAN QUEEN, comes the third book in the Curse of the Lost Isle series, SEDUCING SIGEFROI.

You wouldn't believe all the work Michelle  and Judith went through, researching the perfect characters for the cover. In this case, Sigefroi of Luxembourg, the hero, is a real character, the founder of a dynasty that became very influential later in history. As such, there are representations of Sigefroi on stained glass windows, and written descriptions of him in history books.

Sigefroi had red hair and light hazel eyes, which was a common thing for a germanic knight of the period. Finding a red-haired cover model to fit the bill, however is an impossible task.

I've given my opinion on several pictures and sent pictures I found that might work, in order to help, but I realize how difficult it is.

As for the heroine, Melusine the Fae, she is even more difficult to pinpoint. She is an ondine. She is a woman most of the time, but one day each month she becomes a mermaid, a serpent from the waist down. She sometimes dresses in chainmail, rides a white horse, and wields a magic sword. Here is the best representation I could find of her transformation at sunset.
Oh, and here is a picture of the Bock of Luxembourg, a castle (now in ruins) at the top of a cliff. Can you see the Roman bridge at the very bottom? That's where Sigefroi and Melusine meet for the first time.

I can't wait to see what the very talented Michelle Lee who designs the book covers for Books We Love will come up with. But judging by what she did with the previous covers, I know it will be great.

Of course, little is known of this first Sigefroi of 963 AD, since the written records of the period are few. Still, there is a generalogy, and a few land deeds, and then there is the legend.
Posted by Vijaya Schartz at July 12, 2012 1 comment: 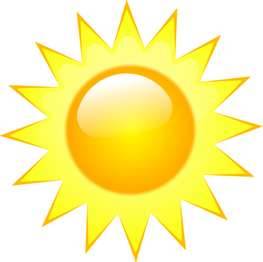 Our first weekly winner is Theresa Dell! Theresa, please visit our website at

and choose the eBook or Spice eBook you'd like to receive. Email the title to

All entries, including weekly winners, are in the running for one of five Amazon gift certificates to be given away in July, August and Sept., plus two gift baskets. See the prizes and enter here:  http://bookswelove.net/contest.php

Important notice: Winners must subscribe to Books We Love's monthly newsletter. (No spam, just a monthly email with new releases and contest announcements. Find the simple entry form on the contest page.)

Curiosity piqued? Visit our blog and find out more!