I recently watched the movie “Queen of the Desert” starring Nicole Kidman. It chronicled part of the life of Gertrude Bell, traveler, explorer, archaeologist, writer, linguist, and the greatest female mountaineer of her age. To be honest I had no idea who this woman was, but the movie had me intrigued about her amazing life and exploits. Her bravery and astonishing thirst for life left me breathless. After reading up on her I came to realize that the movie just skimmed over a very small part of her life story. 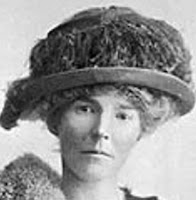 Her family were iron masters. In 1886, Bell went up to Oxford, where she became the first woman to win a first-class degree in modern history. She taught herself Persian and traveled to Iran in 1892, where her uncle was British ambassador. Gertrude became political attaché for the British Empire at the dawn of the twentieth century. Her trips into the desert with just a few trusty men and camels were undertaken with aplomb, and without a trace of fear for her own safety. Gertrude immersed herself in tribal politics and in 1914 made a dangerous journey to Hail, a town in northern Arabia that was the headquarters of a bitter enemy of Britain's new ally, the founder of Saudi Arabia, Abdul Aziz ibn Saud. In 1921 in Baghdad she drew the boundaries of what was known as Mesopotamia that became Iraq.

The movie depicted her as a rich woman who was unlucky in love and rather unhappy. Her first love affair ended in tragedy when her father rejected her lover. According to James Buchan she did have other lovers throughout her life but the movie only centered on two of them, and both affairs ended badly. She traveled around the world twice and gained renown for surviving 53 hours on a rope on the unclimbed north-east face of the Finsteraarhorn, when her expedition was caught in a blizzard in the summer of 1902. Gertrude died suddenly on July 12th 1926. The story was that she ran out of physical energy after spending so much of her life beneath the heat of the desert, but in truth she died of an overdose of sleeping pills, whether by accident of intention no one knows. She is buried in Baghdad, which seems fitting.

On researching strong women to match Gertrude through history I found many, but the following are just a few who stand out for me, mostly thanks to my history lessons at school.

Elizabeth I, the long-ruling queen of England, governed with relative stability and prosperity for 44 years. More than a few movies have covered various parts of her life and reign. The Elizabethan era is named for her. Queen Elizabeth was born in Greenwich England. She was a princess, but declared illegitimate through political machinations. She eventually claimed the throne at the age of 25 and steered England through wars, and political and religious turmoil.

Elizabeth I, remains perhaps England's most famous monarch, apart from the present day Elizabeth. She grew up in complex and doubtlessly difficult circumstances. The daughter of King Henry VIII and his second wife, Anne Boleyn, she was just 2 when Anne Boleyn was beheaded on the orders of her husband, based on questionable charges of adultery and conspiracy. Elizabeth and her older half-sister Mary were declared to be illegitimate as Henry sought to pave the way for a male heir. They were later reinstated as potential heirs.

Elizabeth was raised like any other royal child, and received tutoring. She excelled at languages and music. After her father's death in 1547, Elizabeth’s succession became another pressing issue once she took the throne. She showed her talents as a diplomat, managing a number of suitors and potential royal matches during her reign. Queen Elizabeth died at Richmond Palace in Surrey. With her death came the end of the house of Tudor, a royal family that had ruled England since the late 1400s. The son of her former rival, Mary Stuart, succeeded her on the throne as James I. Although the end of her reign was difficult, Elizabeth has largely been remembered as being a queen who supported her people. Her lengthy time on the throne provided her subjects with stability and consistency. Sometimes referred to as the “Golden Age”, the arts had a chance to blossom with Elizabeth's support. 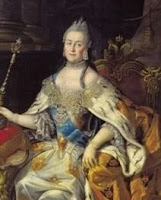 Renowned as Catherine the Great, Empress of all the Russias, this remarkable woman was neither Russian nor originally named Catherine. She was born Sophie Friederike Auguste from Anhalt-Zerbst. Although a princess, she came from an obscure and impoverished German duchy. Her mother had royal connections, which resulted in a winter journey by 14 year old Sophie to St. Petersburg at the invitation of the childless Empress Elizabeth, who was seeking a bride for her heir, Peter.  On 21 August 1745, sixteen year old Sophie married Peter, then seventeen. Peter was also German-born, but the couple had little else in common. Peter was eccentric and loathed the country into which he was imported as child heir. He remained a supporter of all Prussian, especially the Prussian military, whereas Sophie came to Russia committed to doing whatever had to be done in order to qualify for the crown. She learned to speak Russian, converted to Orthodoxy, whereby she received the name Catherine, and with charm and determination cultivated long-term relationships with the powerful and well-connected.

After the death of Elizabeth in 1762, a swift and bloodless palace coup was all it took to remove the hapless Peter from the throne which he’d sat on for a mere six months. He was replaced by Catherine, and so this German princess with no Russian blood in her veins, and no legal right to rule, became the sole occupant of the Empire's throne. She governed for the next thirty-four years—longer than any of the country's other female sovereigns. We’ve all heard of Catherine's romantic liaisons, but in fact Catherine had about a dozen "favorites". The most famous were Grigory Orlov, an instrumental member in the coup that brought her to power, and Grigory Potemkin, a diplomat and military leader who may have secretly married her. Catherine was known for the generosity she showed her favorites, and was also smart at parting with them so there was little animosity. She died of a stroke at the age of sixty-seven, the oldest of any Romanov monarch, and is buried in the Cathedral of the Peter and Paul Fortress. 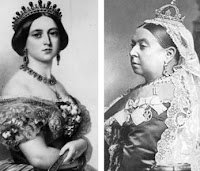 Queen Victoria served as Queen of Great Britain and Ireland from 1837, and as empress of India from 1877, until her death. Born Alexandrina Victoria on May 24th in London, England, she was the only child of George III's fourth son, Edward, and Victoria Maria Louisa of Saxe-Coburg, sister of Leopold, king of the Belgians. Victoria’s father died when she was a baby and her mother became a domineering influence in her life. As a child, she was said to be warm-hearted and lively. She married her first cousin, Prince Albert of Saxe-Coburg and Gotha, in 1840. They had nine children who later married into royal or noble families across Europe which earned her the title of “The Grandmother of Europe”. Victoria went into deep mourning after Albert’s death in 1861.

Victoria became not only the most powerful woman in history being the Queen of Britain, but also head of a vast colonial Empire. She ruled for 63 years and despite having to share her power with the British Parliament, exerted a large amount of power over political decisions. She contributed to large political and social reforms, one being the Third Reform Act granting the right to vote to all male householders, thereby extending the vote to most British men.

Born Emmeline Goulden in Manchester, England she was the eldest daughter of ten children and grew up in a politically active environment. Her parents were both abolitionists and supporters of female suffrage. Emmeline was fourteen when her mother took her to her first women’s suffrage meeting. She chafed at the fact that her parents prioritized their sons' education and advancement over hers

In 1903, she founded the Women's Social and Political Union, which used militant tactics to agitate for women's suffrage. Imprisoned many times Pankhurst supported the war effort after World War I broke out. Parliament granted British women limited suffrage in 1918. Pankhurst died shortly before women were given full voting rights.

Joan of Arc, nicknamed "The Maid of Orléans," was born in Domrémy, Bar, France. The daughter of poor tenant farmers Jacques d’ Arc and his wife, Isabelle, also known as Romée, Joan learned piety and domestic skills and never ventured far from home, taking care of the animals, and also becoming skilled as a seamstress. At the time of her birth, France was embroiled in a long-running war with England known as the Hundred Years’ War. This dispute began over who would be the heir to the French throne. By the early 15th century, northern France was a lawless frontier.

At the age of eighteen, military leader Joan of Arc, acting under divine guidance, led the French army to victory over the British at Orléans and became a national heroine of France. Captured a year later, Joan was burned at the stake as a heretic by the English and their French collaborators. She was canonized as a Roman Catholic saint more than 500 years later, on May 16, 1920. 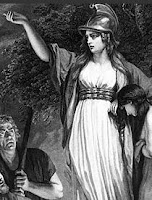 as she is more commonly known, ruled the Iceni tribe of East Anglia alongside her husband, King Prasutagus, at the time of the Roman conquest of southern Britain. Boudica was a striking looking woman, very tall, with a fierce look in her eyes. Her great mass of red hair fell down to her hips. Her appearance was said to be terrifying. She secured a place of notoriety in British folk history, mostly remembered for her courage as “The Warrior Queen” who fought the might of Rome. In 1902 a bronze statue of her riding high in her chariot, was placed on the Thames embankment next to the Houses of Parliament in the old Roman capital of Britain, Londinium.

Britain has produced many fierce, noble warriors down the ages who have fought to keep Britain free, but this formidable lady’s name will never be forgotten. She and her allies gave no quarter in their victories and when Londinium and Verulamium (St. Albans) were stormed, the defenders fled and the towns were sacked and burned. Famously, Boudica and her daughters drove round in her chariot before the battle, exhorting them to be brave. She declared that she was descended from mighty men, but was fighting as an ordinary person for her lost freedom, and her outraged daughters. She is said to have asked the men in the ranks to: “Win the battle or perish” as that is what she would do. If they wished to live in slavery they could do just that. But Boudica was not killed in the battle. She took poison rather than be taken alive by the Romans.

So, there you have it. By watching a movie that started me thinking on how women have made their mark in history I went in search of some other women who made a huge impression and in their own way proved a match for any man. And there are dozens more out there who proved to be just as brave, powerful, and inspiring as these few.