Although Thanksgiving can be traced back to 1621 at Plymouth Colony in Massachusetts, I was surprised to find that the first "Official" celebration was held in York, Pennsylvania in 1777.  The British had captured Philadelphia, pushing the Continental Congress out of that city. The Patriots fled west to York, a sleepy farm town populated mostly by Germans.

When the rebel General Gates defeated the British at Saratoga, the tide turned, and the exiles held a celebration, passing a resolution for a feast to be held, to honor the victory, on Dec. 18th. Hardly the date we use today. It's doubtful they had turkey or stuffing, and with limited resources, even enjoyed a hearty meal. But it showed the new government's growing strength in this establishment of the holiday. 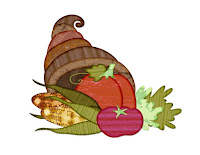 The gathering was somber, with prayers of thanks, and might have included German (Pennsylvania Dutch) dishes. If they were fortunate, they ate Schnitz un Knepp: apple dumplings. Spaetzle: noodles and dumplings. Or Gumbis: a casserole of meat, onions, and dried fruit.

My novel, Her Vanquished Land, is set in Pennsylvania during the American Revolution, told from a different perspective. Rowena has little time to celebrate Thanksgiving as the rebels close in to plunder her home and life. Her family are Loyalists, the people who thought it was insane to fight for independence; the people who stayed loyal to England and the King. They believed they were on the right side. Tarred and Feathered, even hanged, they kept their loyalty and as a result were chased from the new United States. Many settled in Canada.

I threw in a thwarted love story as well, a Welshman who spies for the British, who captures Rowena's hoydenish heart. However, he harbors his own secrets and may have no need for her confused (to her) affection. Will they survive the war and find love?

The Loyalist side of our American history is seldom told, but it is an interesting part of the development of North America. 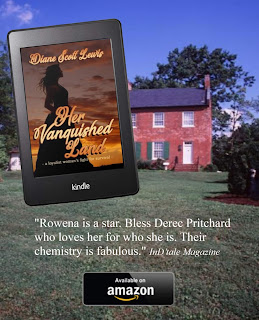 To purchase from Amazon
For more information on me and my books, visit my website: Diane Scott Lewis
Diane Scott Lewis grew up in California, traveled the world with the navy, edited for an on-line publisher, and wrote book reviews for the Historical Novel Society. She lives with her husband and one naughty puppy in Western Pennsylvania.
Posted by Diane Scott Lewis at November 21, 2019