I read on my calendar that today is National Boss Day. I live in Canada and have never heard of this 'national' day, promoted by Hallmark and of course, bosses. I had to chuckle. Boss Day?

And then I had to wonder...  how did National Boss Day come about? I found the answer courtesy of Google and Wikipedia.

In 1958, a woman by the name of Patricia Bays Haroski from Deerfield, Illinois, wanted to show appreciation for her boss in a special way. It just happens that Patricia's boss was her father and his birthday was October 16, thus Boss Day. Being his daughter and aware of the trials and tribulations of being boss-man and perhaps, a maligned boss-man, she wanted her colleagues to better understand and appreciate the work, dedication and challenges faced by her dad - their boss. The idea must have gone over well because it slowly gained butt-kissing traction, and in 1962, the Illinois Governor officially proclaimed October 16 as National Boss Day. 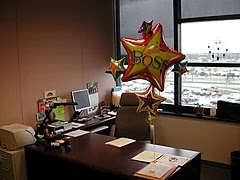 Now I'm all for a national day - more so when it's a national 'holiday' - but Boss Day? Truly, isn't every day 'Boss Day' when the employee does their job and makes their boss, and therefore the company, look good? Greeting card company Hallmark encourages workers to buy a National Boss Day card (which Hallmark started printing in 1979) so the worker can extol the generosity and fairness of their boss, via the honey-tones of the adjective-laden, bleeding-heart cards.

Let's not destroy the concept, though. Perhaps a reversal? Instead of the employee thanking the boss for being kind and fair, the boss should thank the employee for making his/her job less challenging. I mean, what goes around, comes around - right?

Here's what Mark Stevens, president of the marketing firm MSCO and author of Your Marketing Sucks, says about National Boss Day.

"The dumbest idea I have ever heard of."

Uh huh. I've been my own 'boss' as an author since 2014 when I lost my career job due to business restructuring. Say no more?

Question for readers: is being bossy the same as being 'bully?' Check out Jayden's character from the award-winning Twisted Climb series and decide if her view of life and her sassy approach to all things not going her way, is bully or bossy. 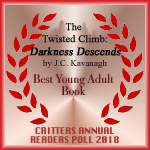