Paying off at the Boom, murder in 1800s Virginia by Diane Scott Lewis

In my upcoming novel, Ghost Point, my characters are involved in the Potomac Oyster Wars, which took place in the 1950s. Men were fired on and killed in the quant town of Colonial Beach, Virginia.

I bring in an earlier grisly practice called "Paying off at the boom."

My hero Luke, is already 'dredging' oysters, an illegal practice that destroys the beds. The Oyster Police commanded by Maryland are constantly patrolling to arrest the Virginians out on the Potomac River.

Luke is desperate for the extra money to support his family. But soon dead bodies are found at the Point off Monroe Bay, and the Virginian's worry this old practice is again being used.

"Throughout the 1800s and well into the 1900s oyster shucking and packing houses could be found all along the shoreline of Maryland and Virginia. Newly freed slaves, whites, and immigrants labored side-by-side working long hours with little pay to fill the demands for oysters from as far away as Australia. Even the shells themselves became a commodity as farm fertilizer and for use in mortar.

"Watermen, often known as a rough and bawdy lot, made their living from the water often under harsh conditions and amidst several major wars. It was hard work harvesting oysters, and often men were tricked into working on boats only to be left along the shoreline with no pay. Another more sinister method of payment was called “paid by the boom,” meaning that after a stint aboard a boat, the worker would mysteriously fall overboard, never to be heard from again."

Though these events never happened in the 1950s during the notorious Oyster Wars, where Maryland Oyster police fired on Virginia watermen dredging oysters, I 'imagined' a revisionist reoccurrence of this terrible practice.

The skeletons would wash up at the area called the Point, which formed a hook at the end of Monroe Bay. Thus it became known a Ghost Point.

Don't forget to pick up a copy of  Her Vanquished Land, my latest release; a story of the American Revolution, told by a young British loyalist. A woman caught up on the losing side.

"Rowena is a star. Bless Derec Pritchard who loves Rowena for who she is. Their chemistry is fabulous. Readers will love to read this alternative view of American history." InD'tale Magazine 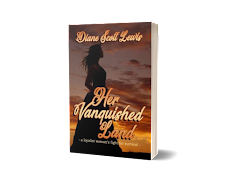 To purchase my novels and other BWL books: BWL

Find out more about me and my writing on my website: Dianescottlewis

Diane Scott Lewis lives in Western Pennsylvania with her husband and one naughty puppy.