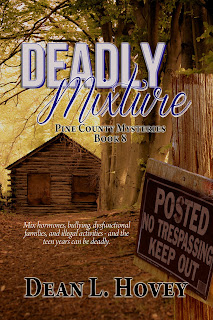 Deadly Mixture (published August 1 by BWL publishing) takes my readers back to Pine County. As with all my books, the research took me a number of unexpected places, in geography as well as content.

For the uninitiated, Pine County is 1,400 square miles located just an hour's drive north of the St. Paul/Minneapolis urban area. The journey quickly leaves behind the urban centers, then suburbs, taking us past farmland, then into Pine County's forests, lakes, swamps, and rivers.

I've interviewed three Pine County sheriffs who've pointed out the unique police issues facing the rural sheriff's departments. The first issue is police response time. There are nights were only two deputies are assigned to patrol that huge area. If they respond to a crime or car accident in the farthest corner of the county, it might take them 45 minutes to respond to an emergency in the other corner of the county.

Many residents are trying to escape the hubbub of the urban areas. They seek the solitude, but expect all the services available in the urban and suburban homes. Police response time is one issue. There are other trade-offs as well. You lose the anonymity of the city and enter a community where people know their neighbors and look out for each other. The other side of that coin surprises many people who relocate to "the boonies." Your neighbors get to know you. They bump into you at the grocery store. They also know what you do, have done, and may do at some future time.

A widower friend started dating a year after his wife died. He had breakfast the morning after his date at the local mom and pop restaurant. He was surprised when the waitress asked about the restaurant where he'd taken his date the previous night. Someone else asked about the movie they'd seen, and a third person expressed his disappointment that my friend was dating so soon (one year) after becoming a widower.

I try to capture those issues in the Pine County books. The teens in Deadly Mixture are trying to escape the prying eyes of the community. They use an abandoned hunting shack to escape what they see as the oppression in their dysfunctional families. A series of unfortunate choices throw them into a deadly mixture of truancy, drugs, and death.

Sergeant Floyd Swenson is back, as is his girlfriend, Mary. Other regulars include Pam Ryan, freshly returned from maternity leave, and Sandy Maki. I've introduced a new character, C.J. Jensen, a veteran cop hired to cover for Pam's maternity leave. C.J. (Charlene Joy) is rebounding from the recent death of her husband. Her basset hound pup, Bailey, brings some humor and another set of challenges to the small sheriff's department.