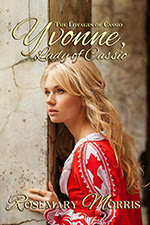 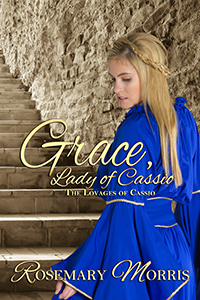 To learn more about Rosemary's work please click on Grace, Lady of Cassio.

My new novel, Grace Lady of Cassio, the sequel to Yvonne, Lady of Cassio, is a classic, fact fiction, medieval romance set in Edward III’s reign, has been released as a paperback and an e-book.

I am often asked; “How do you write a historical novel?”

There is no right or method to write any novel, so authors have different methods. Some plunge in with no preparation, others plan each chapter before they write the first paragraph.

I spend a long time thinking about the characters. Before I begin a new novel, I must become acquainted with the hero, heroine and other important protagonists.

It takes me a long time to choose appropriate names. The first names of most medieval English males and females derive from their religion. For example, Yvonne stems from Ivo, in old French, Ive (s) and St Ives is said to have come to England from Persia In Latin the meaning of gratia is Grace.  Gracia, Grecia, Gricia occur in 13th and 14th century and may represent Grace. These examples justify my appropriate choice of Christian names in the first and second stand-alone novels about The Lovages of Cassio. I am equally careful to choose suitable names in my novels set in Queen Anne Stuart’s reign, 1702-1704, and those set in the ever popular Regency era.

Medieval parents’ choice of names was conservative. Although the choice for new-born sons and daughters were limited, I imagine that, in common with 21st century parents, some medieval mothers and fathers had earnest discussions about what to name their babies. Apart from being baptised with saints’ names or their derivatives, sometimes children received the first names of legendary figures, famous people, or royalty.

As the saying goes, I think it is worthwhile ‘going the extra mile’ to carefully select my character’s names, bearing in mind they should be appropriate for their social class. While researching my novels I discover lots of names that have gone out of fashion. For example, I chose Richelda for the heroine in my novel, Tangled Love, set in Queen Anne’s reign.

I neither invent improbable names which are glamourous, nor do I choose recently invented names such as Shanna or Sky. I also stick to conventional spelling instead of using a different one, for example Maree instead of Mary or Richearde instead of Richard which would jerk me out of the story.

Recently, I read the first few pages of a historical romance in which the hero and heroine’s exotic first names would only be found in today’s kindergartens or primary schools. I discarded the novel because, in my opinion, I did not have faith in a historical novelist who could not be bothered to choose appropriate names for characters will not accurately create past times for her readers.