Dare I write about a troubling incident in recent memory, by Diane Scott Lewis 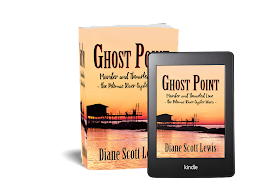 To purchase my novels and other BWL books: BWL

When I worked at the Dahlgren Naval Base, Virginia, in the 90s, a woman told me tales from the little beach town where she lived about a half hour away. Colonial Beach, Virginia, had been a huge tourist destination in the early twentieth century, when boatloads of steamships came down from Washington, D.C. to visit the beach every summer.

But in the late nineteenth century it was the scene of murder of boat crews; I blogged about this previously.

My friend told me the true story of the Potomac Oyster Wars, which took place in the 1950s. Her boyfriend lost a brother in that fraught time, and he hesitated to speak of it. But I was able to talk to him and he showed me photos of the friends he had who were involved. Many who lost loved ones were still skitterish about this history.

But my friend insisted I had to write the story.

Since colonial times, Maryland owned the Potomac and policed the waters where Virginia fisherman plied their trade. Since the end of WWII, times were lean, and the Oystermen snuck out at night to rake "dredge" up oysters. This process destroyed the beds but brought in a larger catch. Tonging for oysters was the approved manner.

Well known people in the town got involved, and a prominent man was killed by the dreaded Maryland Oyster Police. His relatives still reside in the community. Would I step on their toes?

I published my novel, Ghost Point, on this era and tentatively put the info on a FB page called "Memories of Colonial Beach." I thought people would be upset about me, a non native, writing about their history. Instead, they were thrilled, and one woman said she knew the niece of the man who was murdered. They were happy to purchase my novel and speak of those events.

A very generous community. My main characters are fictional, but I used several actual residents of the town.

I plan to do a book signing next year at the Colonial Beach Museum. It seems the younger generation is anxious to learn about this era.

To find out more about me and my books, please visit my website: DianeScottLewis

Diane lives in Western Pennsylvania with her husband and one naughty dachshund.