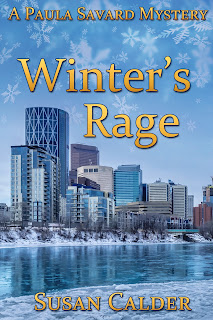 Please click this link for author and book information

This winter Tourism Calgary sent me an email out-of-the-blue. They explained they were considering a  bid for the 2026 Bouchercon World Mystery Convention and wanted my help connecting with the Calgary writing community. The bid needed sufficient volunteer support to host this major convention. Tourism Calgary had done an internet search for local mystery writers and my name popped up in various places. They thought the convention could have numerous spinoff benefits for Calgary.

I'd first heard about Bouchercon at Mystery Writers' INK, a Calgary writing group I belonged to for many years. Members considered it the premiere mystery writing convention in North America. A couple of them attended Bouchercon 2007 in Anchorage, Alaska. They described their experience as a fun mix of learning, book promotion, and travel. Many Bouchercon regulars plan annual holidays around the convention.

I was excited by the email and agreed to meet online with two Tourism Calgary contacts, and later with them and the Bouchercon administrator. I learned that Bouchercon is huge. Typically about 1,800 people attend. The majority are mystery fans, rather than writers. Bouchercon is usually held in the USA, although Toronto, Canada, has hosted three times and the U.K. twice. In London 1990, P.D. James was Guest of Honour. Nottingham England's Lifetime Achievement Guest of Honour in 1995 was Ruth Rendell (not Robin Hood). Other Guests of Honour through the years have included Sara Paretsky, Ian Rankin, Harlan Coben, Laura Lippman, James Patterson, Michael Connolly, Anne Perry, Karin Slaughter, Anthony Horowitz -- enough name dropping.

In October 2017, I attended Bouchercon Toronto. Louise Penny was Canadian Guest of Honour. (Each Boucherson has about a half dozen Guests of various descriptions). I moderated a panel on Noir Mystery Novels to a large audience (scary, both the moderator role and the subject matter). Each convention produces a short story anthology, with the proceeds going to a charity. A highlight for me was my story's acceptance in Passport to Murder, Bouchercon Anthology 2017. This earned me a seat at the author signing table. 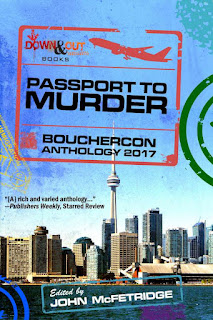 The Bouchercon administrator told us their organization provides a wealth of support and experience for host cities, but, in addition, Calgary would require a strong Local Organizing Committee. I provided Tourism Calgary with names of people and local groups to contact, including BWL. Our publisher, Jude Pittman, was instantly on board and will be part of the committee. Tourism Calgary sent a survey to local writers and organizations and the enthusiastic response exceeded everyone's expectations. Calgary is called the volunteer capital of Canada for good reason. The Calgary Public Library, Calgary Wordfest, and the University of Calgary expressed interest in playing roles.

Tourism Calgary is now preparing a formal bid to host the convention in 2026. In June the Bouchercon administrator will fly to Calgary to assess the city's hotel and convention capacity. If it meets the criteria, I'm told Calgary stands a great chance of winning the bid when the Bouchercon board votes this summer.

Since I've been with them from the start, Tourism Calgary asked me to chair the Local Organizing Committee. After some angst, I agreed to co-chair with Calgary author Pamela McDowell, my friend for 25 years. Pam and I will be busy, but it will be fun to work together on this big project.

Looks like Calgary mystery writers and readers are in for exciting years ahead. Stay tuned. 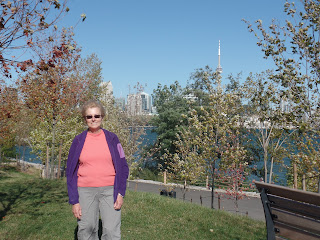 Bouchercon 2017 was an opportunity to visit Toronto in the fall.